One beautiful summer morning, while on a family holiday to the coast, Simon Sandy got struck with the brilliant idea to take his family out for a picnic on the beach. After all, what would a holiday be if they didn't spend any time in the great outdoors? His son, Shane Sandy, loved the idea! He is a little born explorer at heart and his sister Sabrina just loves building sand castles with their three younger siblings.

And so it was settled that their afternoon would be spent by the seaside. Simon and Shane packed the beach umbrella, a mobile barbeque and the wind shield, while mother Amelia packed a basket full of goodies, making sure that there were lots of yummy snacks for everyone to enjoy. And off they went! 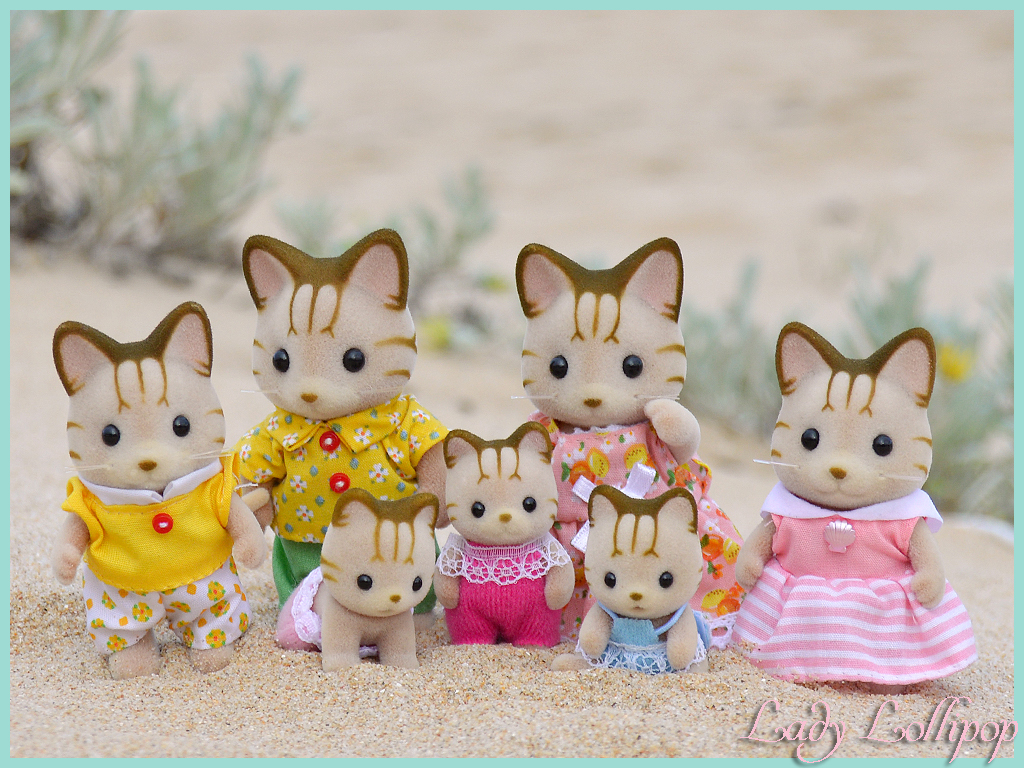 The children helped their father to carry everything to the perfect spot on the beach while mother Amelia tried to wrangle her three youngest children to contain their excitement until they could reach the family's chosen spot to relax for the day. Soon they had the wind shield and umbrella set up and Amelia was lazily lounging in the sun while the babies started building a sand castle nearby, happily babbling together.

Simon didn't waste any time and as soon as he got the chance, he and his tackle box disappeared to go fish on the rocks nearby. 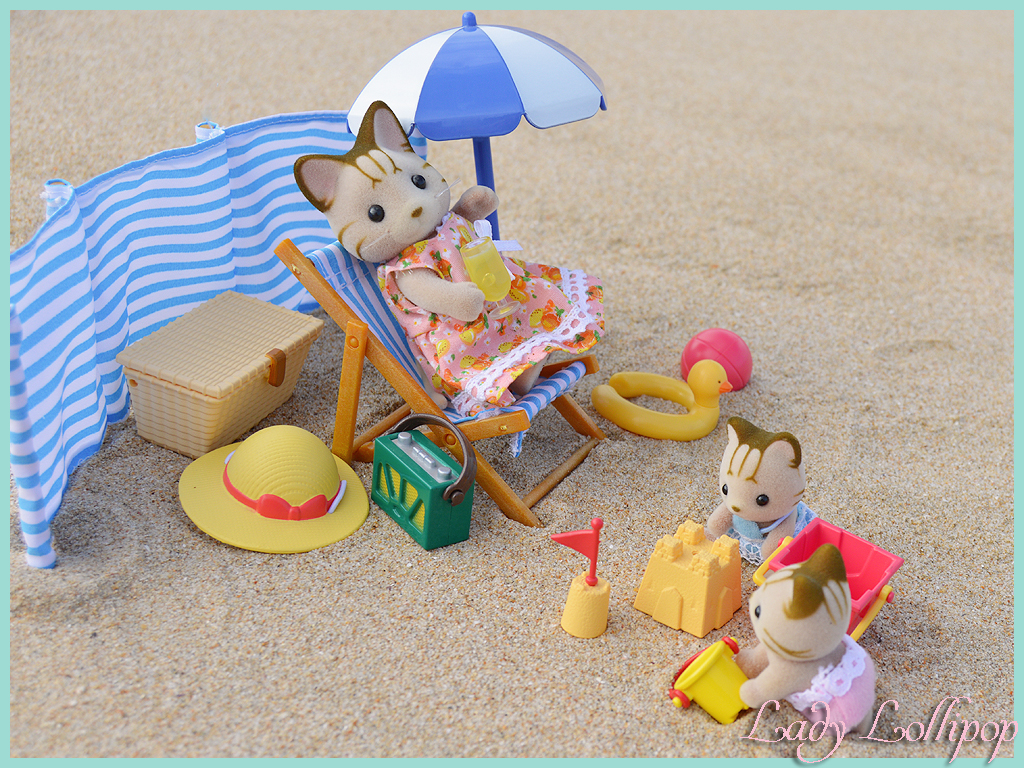 “Let's go exploring!” Shane announced as he hopped, skipped and jumped over the soft sand, landing on his knees and scrunching hanfuls of sand between his fingers.

“Come along, Apricot.” Sister Sabrina chimed as she took her little sister's hand and started following their brother. “Let's go make sure that Shane doesn't get into any mischief!” 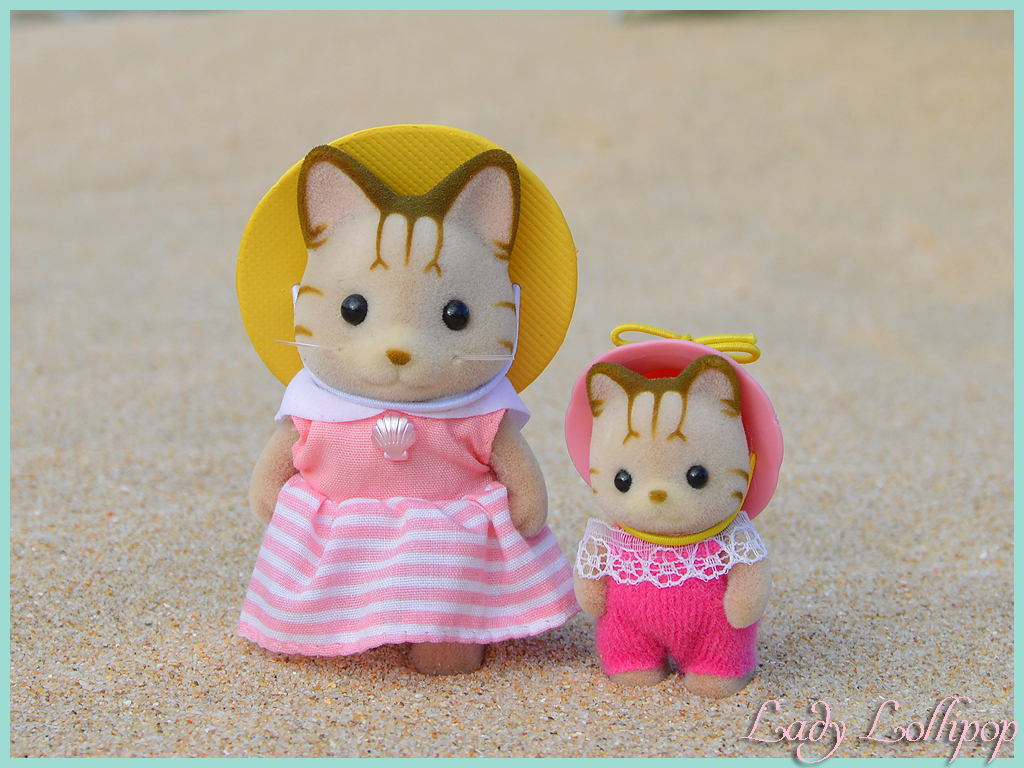 The three kids walked down the beach, picking up shells and poking at bits of washed up seaweed with small driftwood sticks along the beach. They chattered and laughed together as they went along, exploring the coastline far beyond where their father was standing on the rocks and well out of sight of their mother, Amelia. 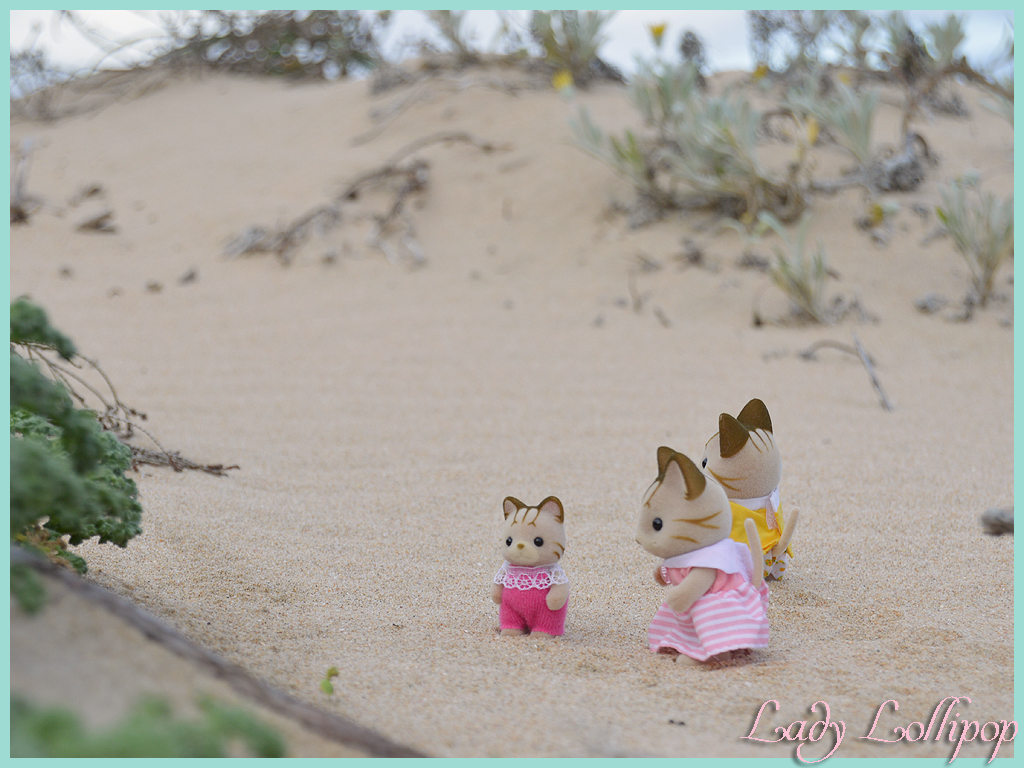 Suddenly, Apricot gave a shriek and her older siblings turned to see what had frightened her so. A large seagull had landed just a few meters from her feet and was inspecting the little kitten in front of him with particular interest. Of course big brother Shane, being the hero of every bedtime story in the Sandy family, dashed in front of his sisters, blocking them from the seagull's view, and threw his arms in the air to scare the offending seagull away.

But the seagull did not move and for a moment, the two just stood there - perfectly still, looking at each other. The seagull made the first move, flapping its giant wings and letting out a loud squawk! With a shriek matching the pitch of his little sister's, Shane turned around and ran as fast as he could. Sabrina and Apricot did not allow themselves to fall behind and all three siblings ran all the way back to the safety of their mother's view. 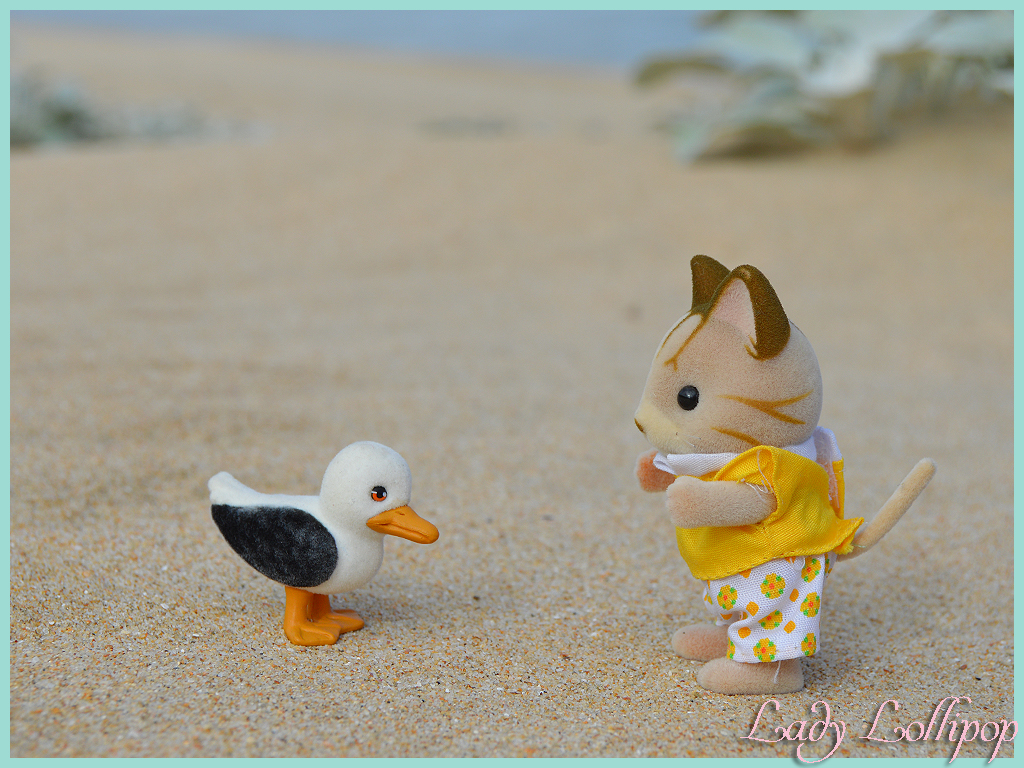 The three children dropped to the ground around their mother, laughing and panting and mother Amelia could only laugh along at the sight before her. Before she had the chance to get the full story of terror out of the three chatty kittens, Simon appeared with the fish that he had caught and they got to work setting up the barbeque to prepare lunch for all of her hungry kittens. After all, the best remedy for unsettled nerves, is a full stomach!

Babies, Scott and Skyler were still builidng and destroying magnificent sand casltes nearby, all the while chatting together in their baby babble, seemingly unaware of the dangers that their older siblings had faced. 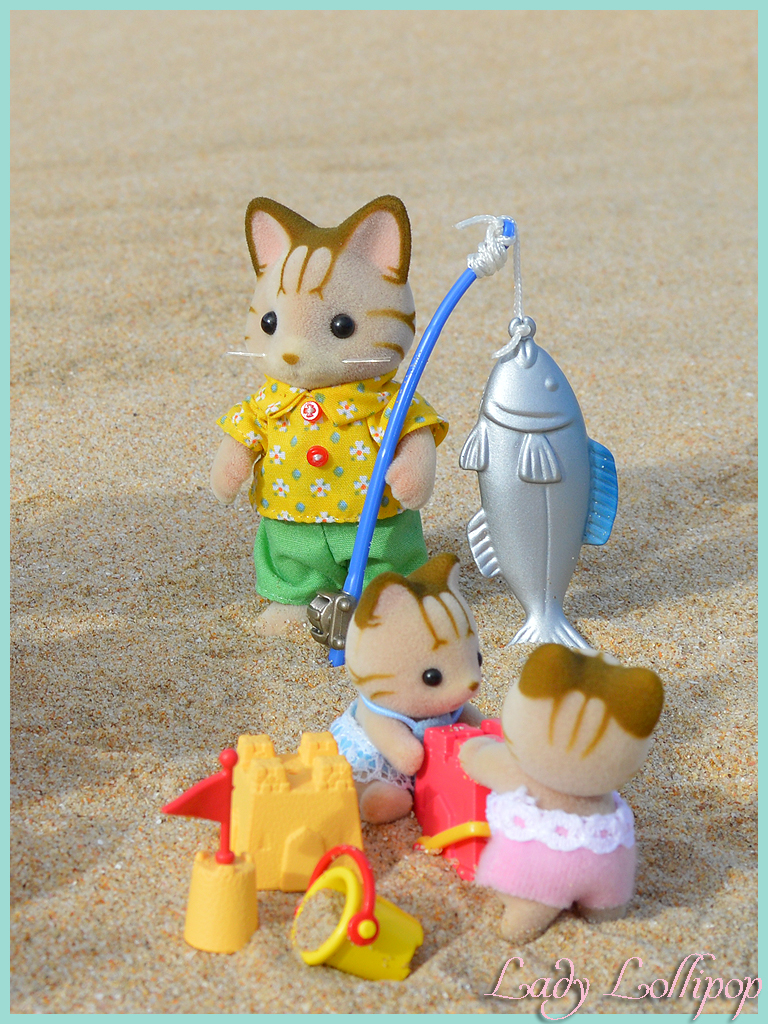 Shane and Sabrina decided to play a quick game of beach soccer before lunch, while Apricot decided to rather rest up after her encounter with the seagull. She preferred to play it safe and keep her younger siblings company. The seagull truly scared the flocking out of her and she would need some time to recuperate after her ordeal.

But as she looked up, her worst nightmare came true and she once more found herself face to face with her nemesis! The seagull had returned... And what was worse, her overly friendly little sister, Skyler, was already crawling towards the feathered fiend at lightning speed. 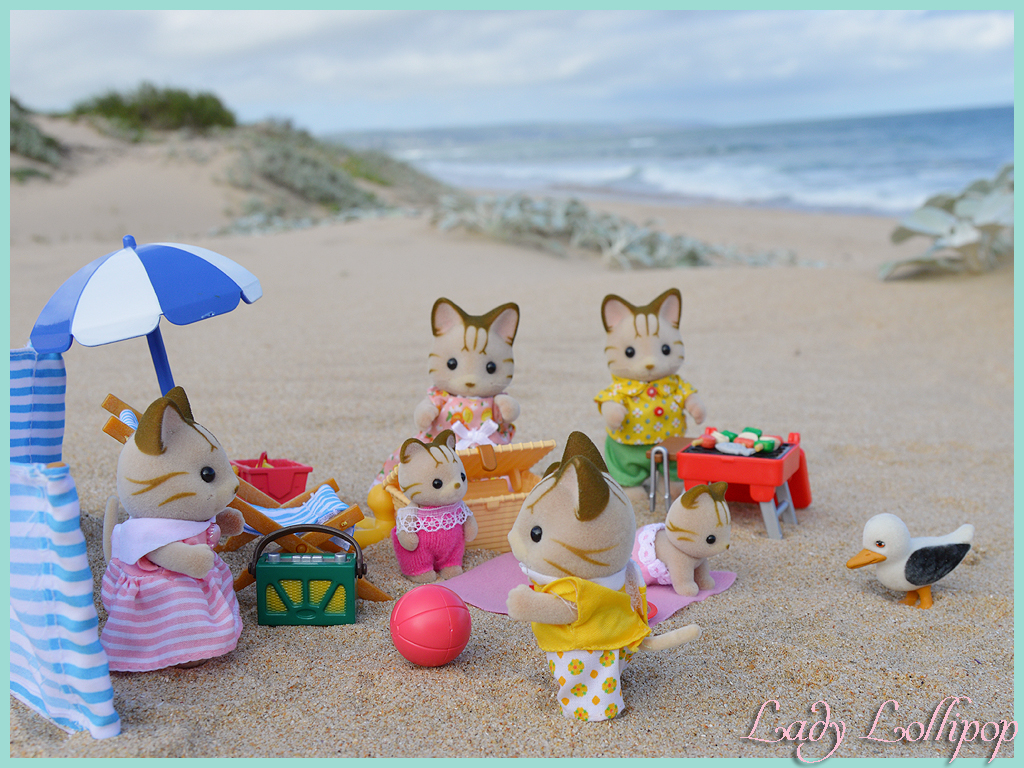 Before Apricot could alter more than a gasp of shock, little Skyler had crawled right up to the curious seagull who once more stood perfectly still, wondering what exactly he was looking at.

Then suddenly Skyler's little paw flew out as she attempted to wave at the curious seagull. Mistaking her greeting for an attack, the seagull lunged to the side, resulting in her blow impacting the gull right on the beak.

The impact made the seagull lose his balance for a moment before he frantically struggled to get into the air and away from this obvious threat to his safety. The seagull squawked back his disgust as he took to the sky and flew away. 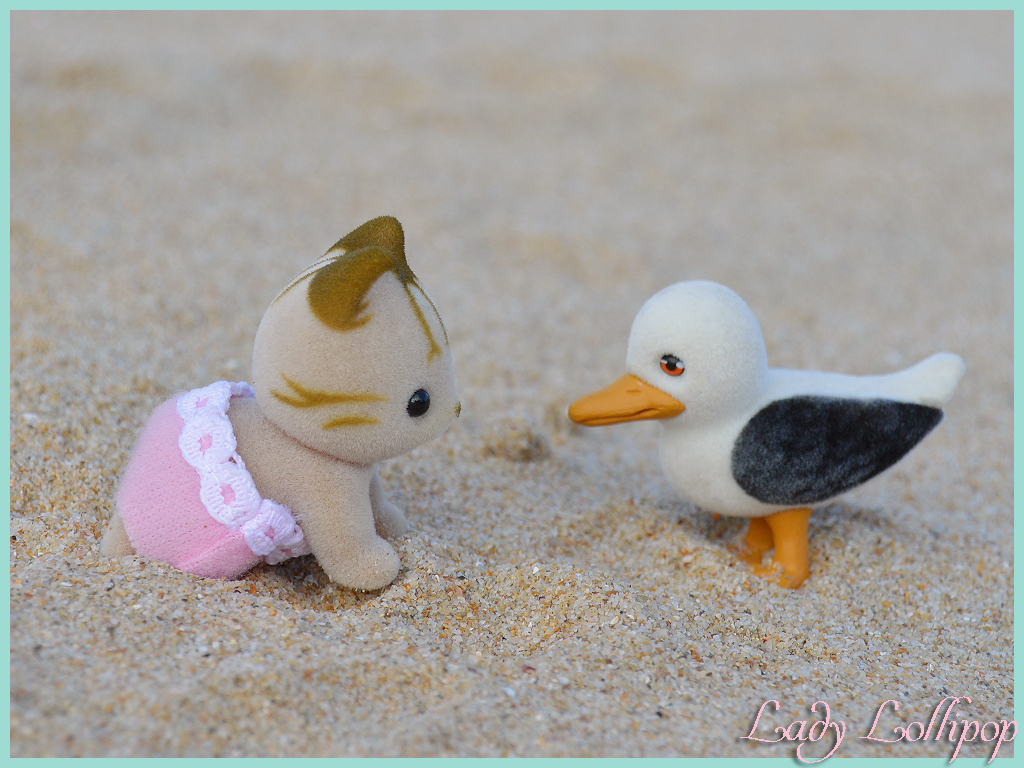 Almost all at once the Sandy family broke out in laughter at the sight! The smallest little member of the family saved them all from the feathery nemesis of Sylvanian Families all along the coastline.

The rest of the day was spent in harmonious chatter with little Skyler keeping a watchful eye out for the friend that she tried so hard to greet, ever hopeful that he would return. And her older sister Apricot keeping an even more keen eye out for the feathery doom that she was sure would strike again at any moment. 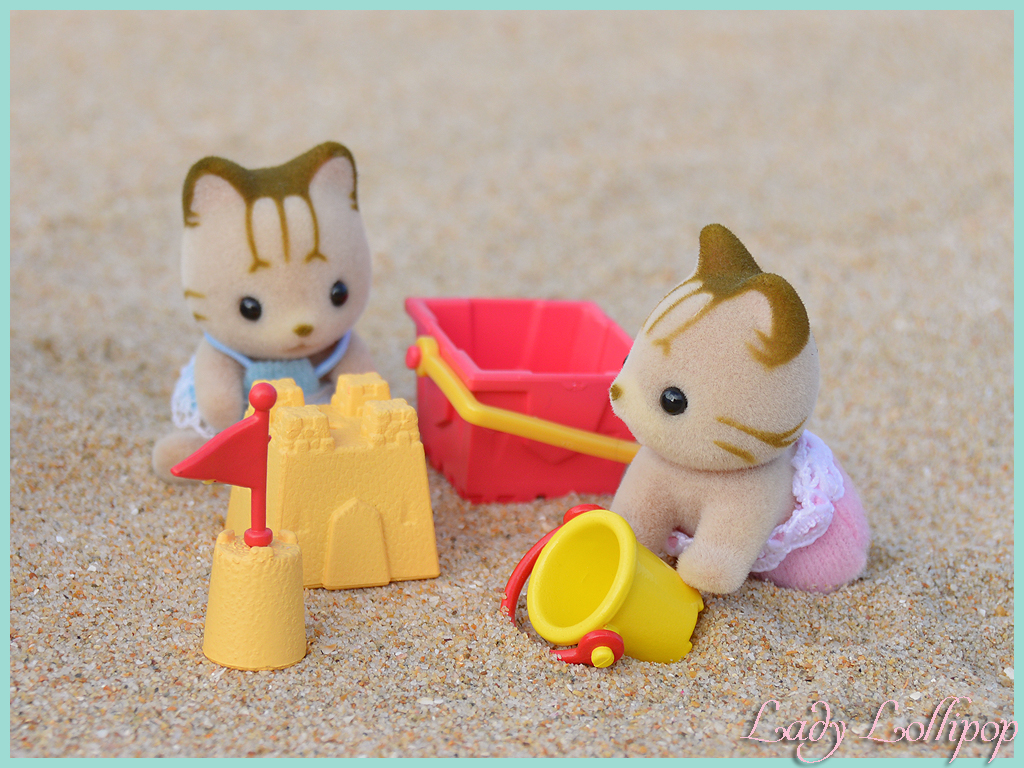