The Relatives are Coming 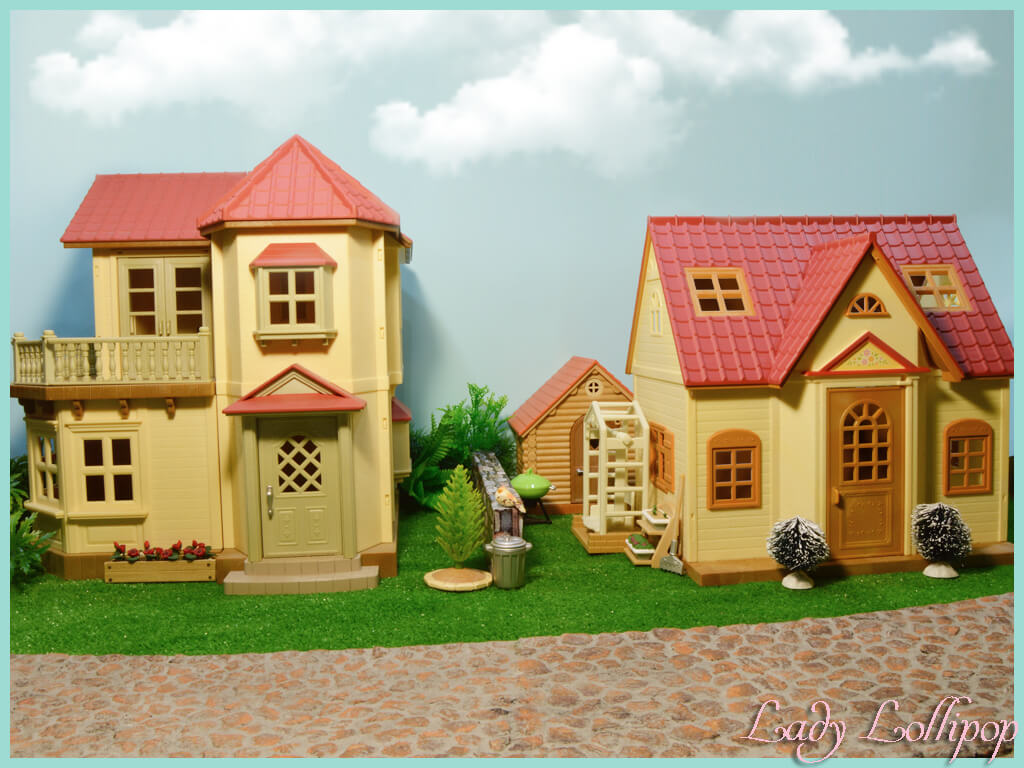 One morning, the villagers of Rooibosch Hill woke up to the birds singing just a little bit sweeter and the sun shining just a little brighter. This was because it was a very special day, a day set apart from the rest by an abundance of love and joy. Valentine’s Day!

Because this day was such a special day in Rooibosch Hill, Mayor Bill Waddlington declared it a school holiday. The children were delighted and most of the villagers made plans for spending the day with their loved ones, going out for lunch or having picnics. Hearts and roses were everywhere to be seen and it even seemed like everyone was just a little bit nicer than usual today.

But, there was one household that wasn’t swept up in the romance of red roses and chocolates, for they were far too busy with other arrangements. The Billabong koala family had been living in Rooibosch Hill for quite some time. Rolf Billabong is the music teacher at St. John’s school and his wife, Matilda, is one of the nursery school teachers at the Rainbow Nursery. 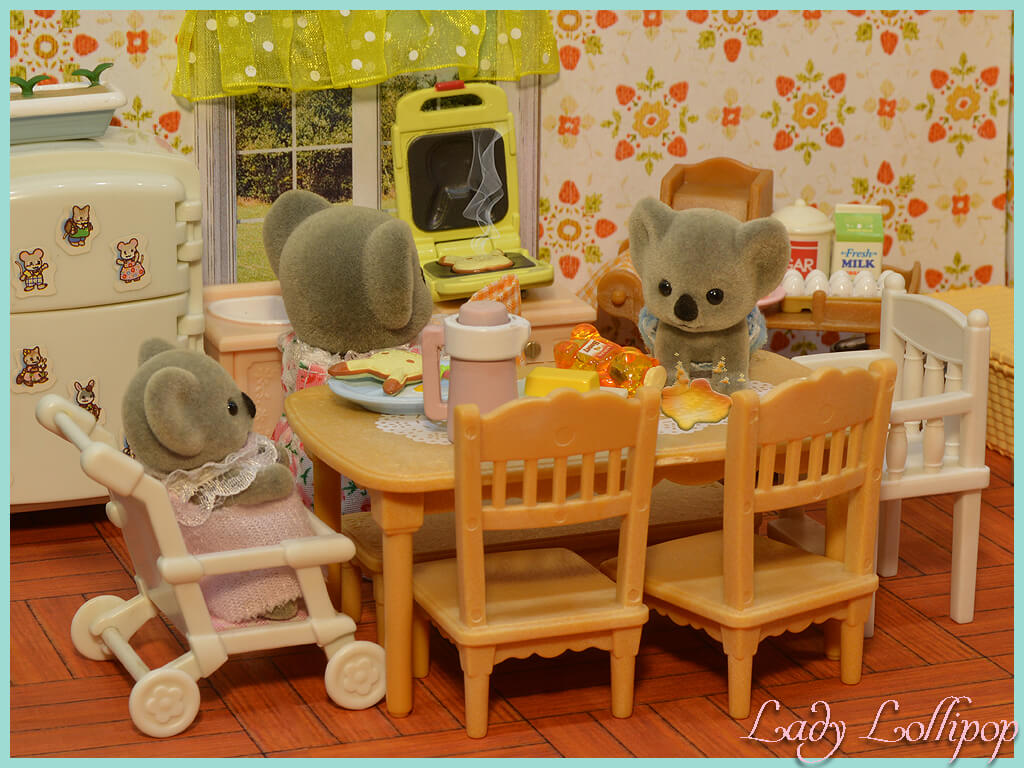 Inside the Billabong house, the whole family was busy preparing for the arrival of their guests, the Outback koala family. Since moving to Rooibosch, Rolf had been nagging his cousin Bruce Outback to come join them. The Outbacks were a bit sceptical about the move at first, but after a while they agreed, since their two young children would have to go to school soon and it was now widely known that Rooibosch Hill had a selection of wonderful schools for little critters. 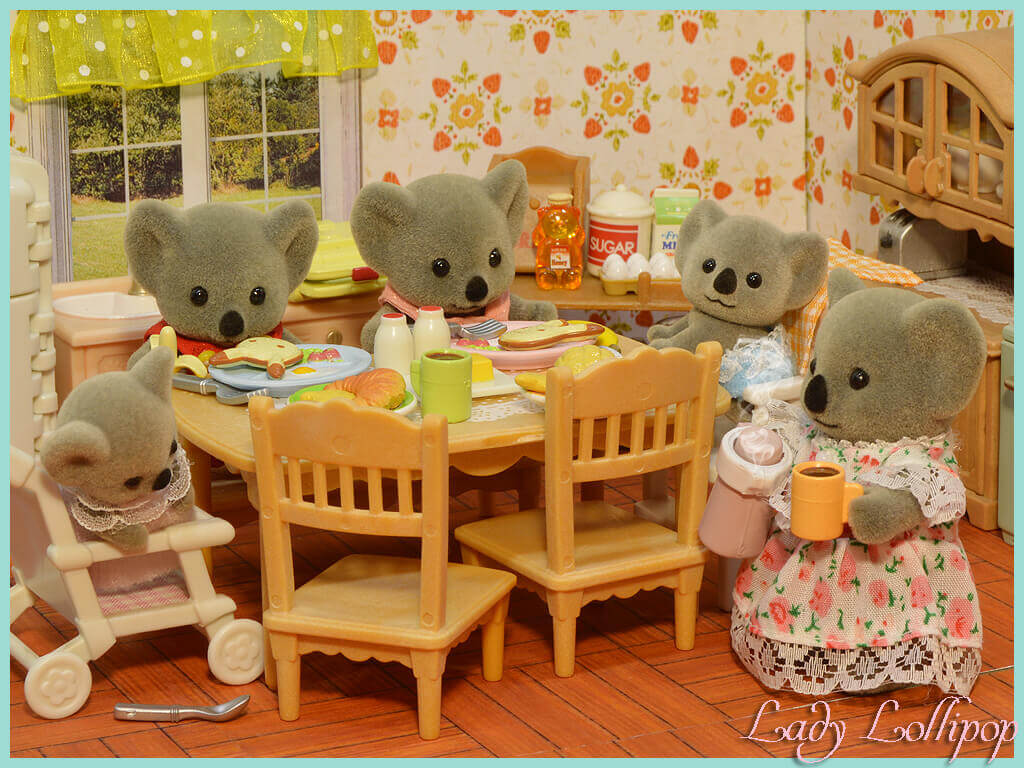 “Oh Mummy, when will they arrive?” Asked Germaine as she sat down at the kitchen table beside her brother.

“They will be here soon, dear!” Matilda replied with a laugh. “Let’s have some brekkie while we wait, shall we? It is going to be a long day!”

Germaine’s brother, Clive, was already munching away on his breakfast and looked amused at his sister’s impatient pout. Matilda was just serving bowls of porridge to the babies when Rolf walked in, still struggling with his bow tie. 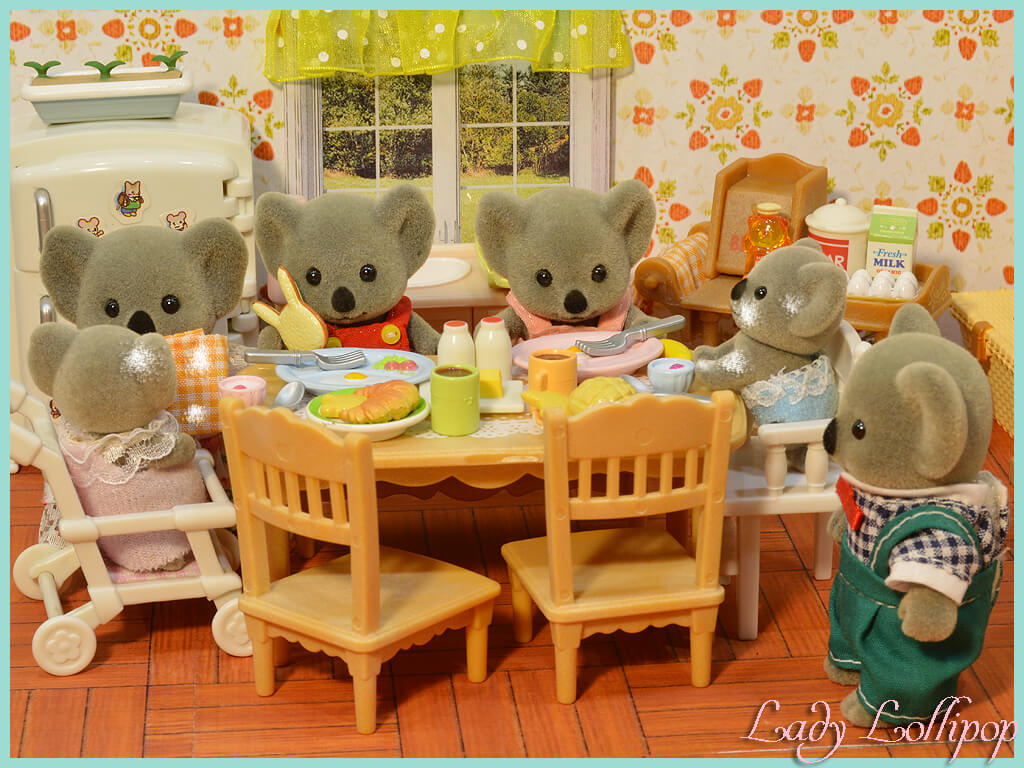 “Good morning!” Rolf exclaimed as he entered the kitchen. “I hope you kids are ready for your rellies’ big arrival, I hear those little ankle biters can be a handful on the good days, so you had better have your wits about you.”

Both Clive and Germaine were looking forward to seeing their second-cousins again, even though they were a few years younger than them. The Billabong twins, Kylie and Jason, were very excited too, even though they were still only babies and had never actually met their aunt and uncle or any of their cousins before.

“Oh, I just wish they would hurry up and get here already!” Germaine wined as she took a bite of her bunny-waffle.

“Don’t worry dear.” Rolf soothed. “Remember, they are coming from 50k’s south of Woop Woop. It takes some time to get here, especially if you have such a terrible sense of direction as your dear uncle Bruce.”

At that, Germaine gave a big sigh and half-heartedly poked at the fried egg on her plate. Matilda and Rolf could only laugh at their impatient little daughter and Clive made a dramatic show of rolling his eyes at his sister. But, even with the light-hearted reaction, Matilda couldn’t help but feel that something else was bothering her little girl. 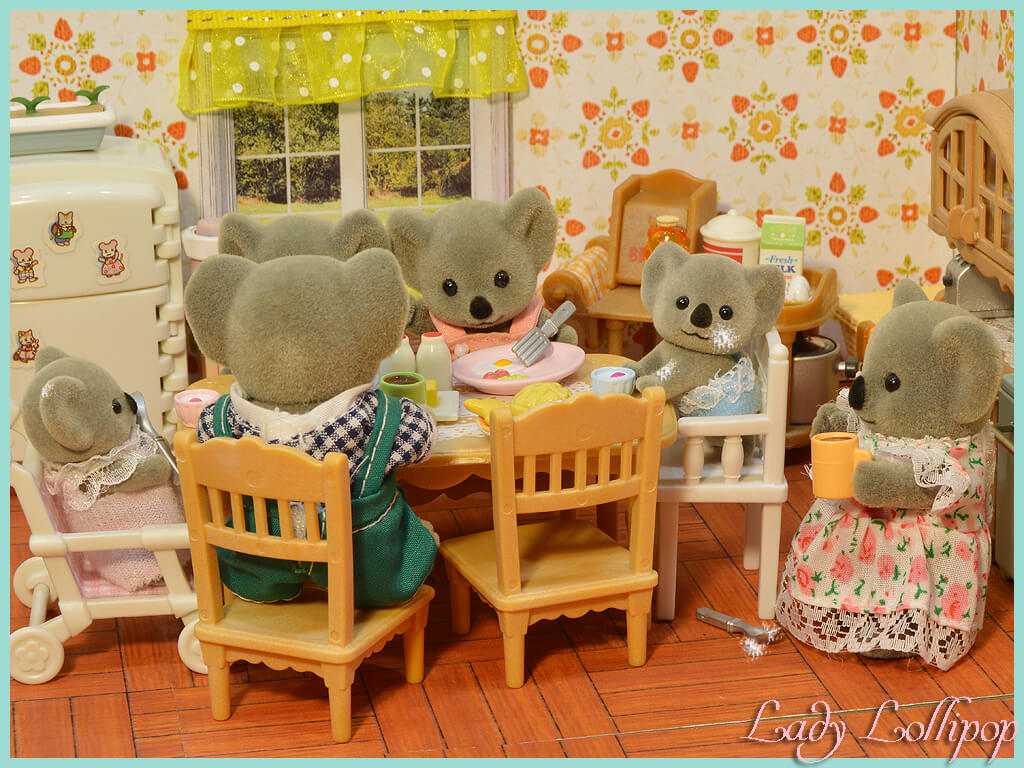 Breakfast went by peacefully, with Clive giving everyone updates on the latest news in the village and Germaine pouting to herself, trying very hard not to get any syrup on her pretty new dress while the babies engaged in their usual morning food fighting ritual. With the amount of food that wound up on the floor, their clothes and all around them in fact, it was a wonder that Matilda’s youngest two children ever managed to eat anything at all!

Rolf and Matilda were both very excited to see the Outbacks too. It had been a very long time since they had left their home country and moved to Rooibosch Hill, leaving their family and friends behind. Of course they made new friends once they had settled in Rooibosch, but still they longed for their family to join them. 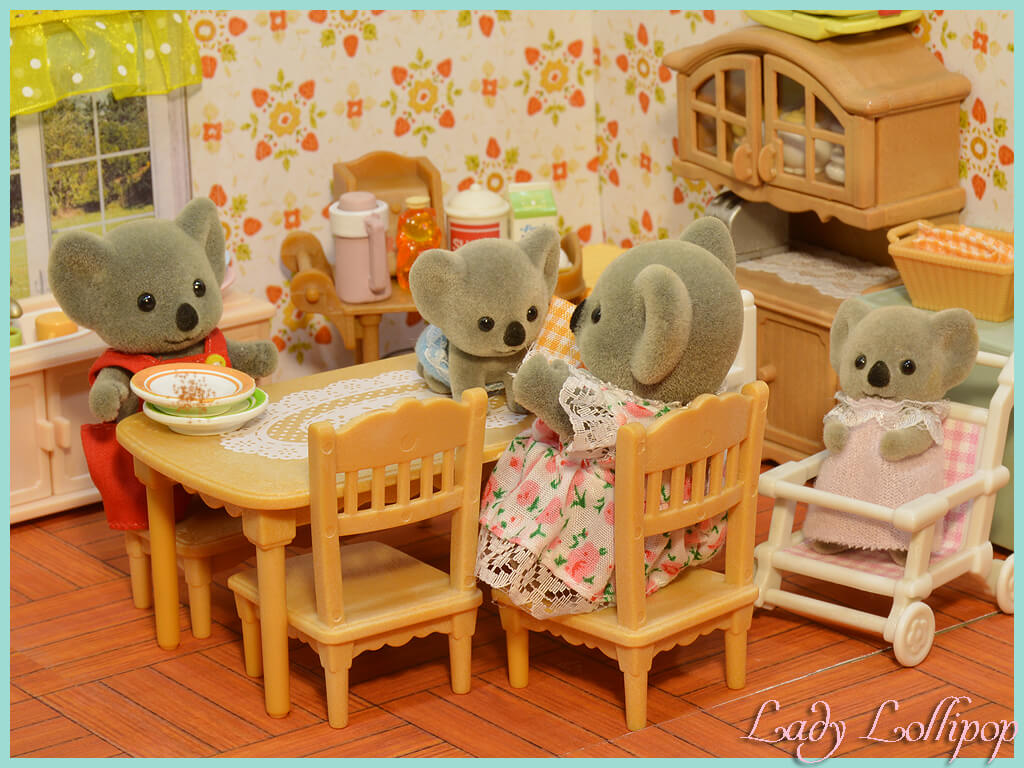 After breakfast, Germaine sulked off to finish her creative writing homework in her room, while Clive offered to help his mother with the morning dishes while she cleaned up the twins. 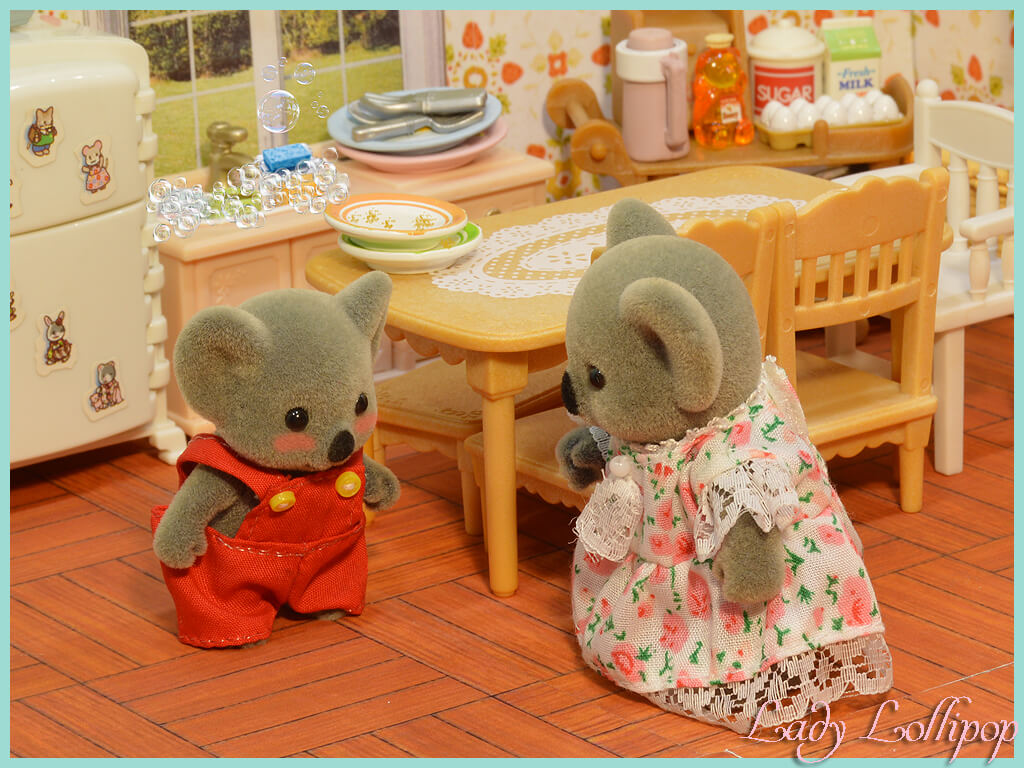 It was the first time that Matilda had seen her chatty son at an apparent loss for words.

“Yes dear, what’s bothering you?” Matilda asked, a little worried that her son could suddenly feel so unsure of himself.

“Well, you see Mom, there is this girl in school…” Clive’s cheeks turned a deeper shade of red as he spoke. “Her name is Polly Polarstar, and I would like to give her a valentine.”

“Oh, what a lovely idea! Do you have anything special in mind?” Matilda asked.

“Well, I stopped by the sweets cart on my way home from school yesterday and there are some lovely cookies that I think Polly would like. I have saved up my pocket money, but I am afraid that I am not very good at wrapping presents…” Still blushing as he spoke, Clive now found the floor below his feet very interesting and kept poking at some invisible item with his toe while waiting for his mother’s response.

“What an excellent idea, Clive! We can go to town when we are done with the dishes and you can show me which wrapping paper you would like for your friend.” Matilda was very glad that her son had gathered the courage to ask for her help and although she felt a moment’s heartache at the realization that her baby boy was growing up, she felt very proud of his courage.

Matilda left a flustered Rolf in charge of the babies while she and Clive went into town to do some last minute shopping before their guests arrived. 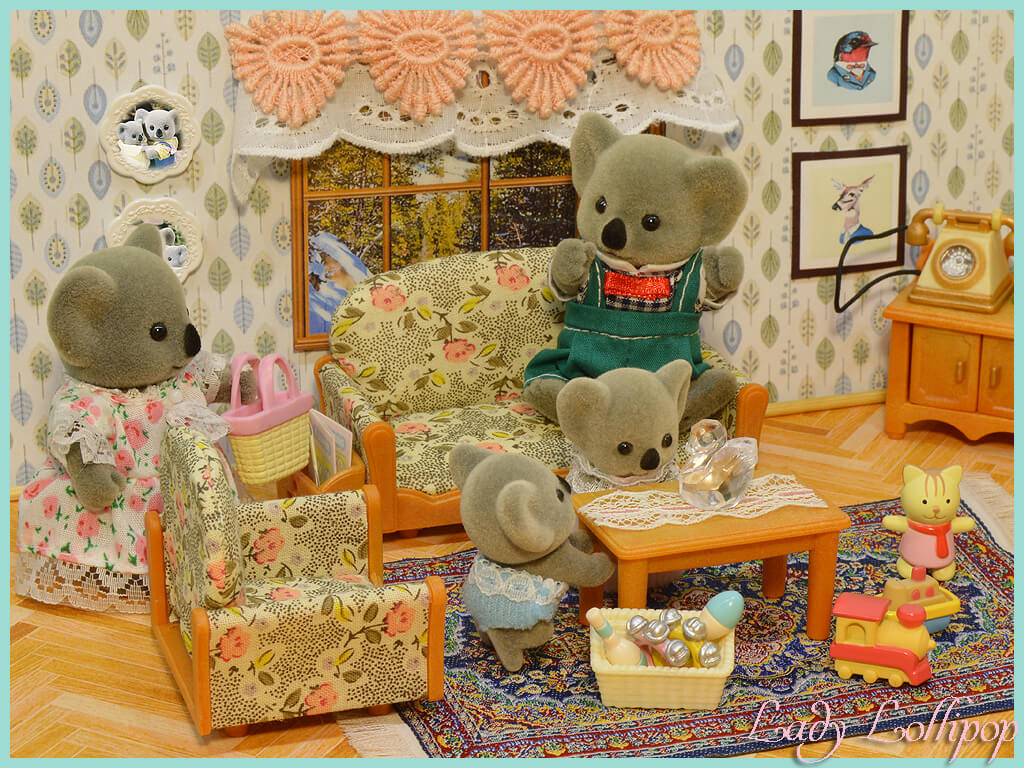 Germaine was still sulking in her room when they left and Matilda suspected that she would still be there upon their return. 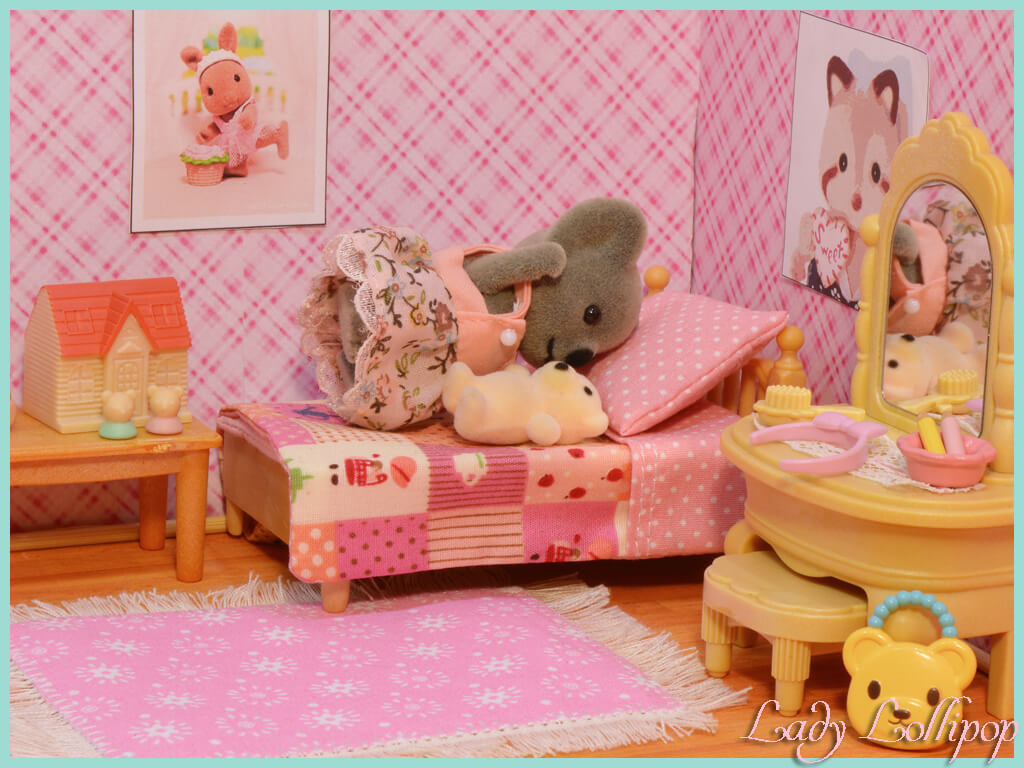 Matilda and Clive talked about many things as they strolled along. Clive seemed much more at ease, as if a great weight had been lifted from his shoulders. He showed Matilda all of his very favourite things on their way to the market and he talked almost non-stop! Matilda only smiled at her son, managing to get the occasional “ooh” or “aah” in between her son’s excited chatter. 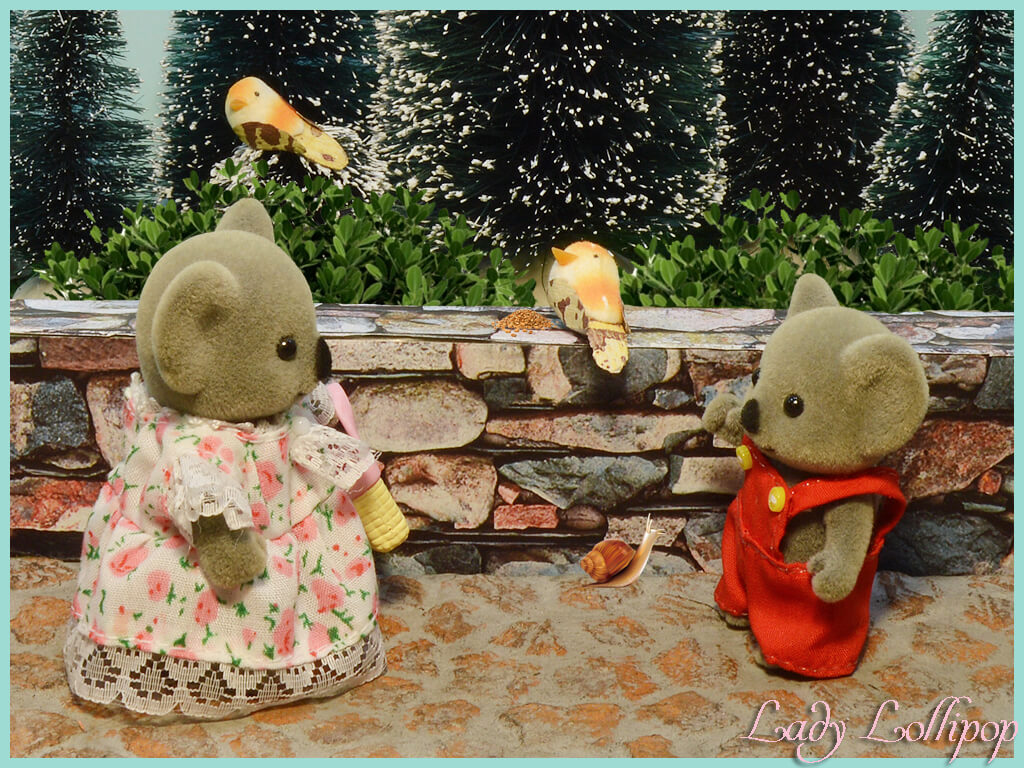 After the two made a quick stop at the Village Market to stock up on groceries, browsed the Village gift shop for gift wrapping paper and picked up Matilda’s order from Marion’s confectionary stand. The whole village was made up for this special occasion and hearts adorned every inch of the village square. 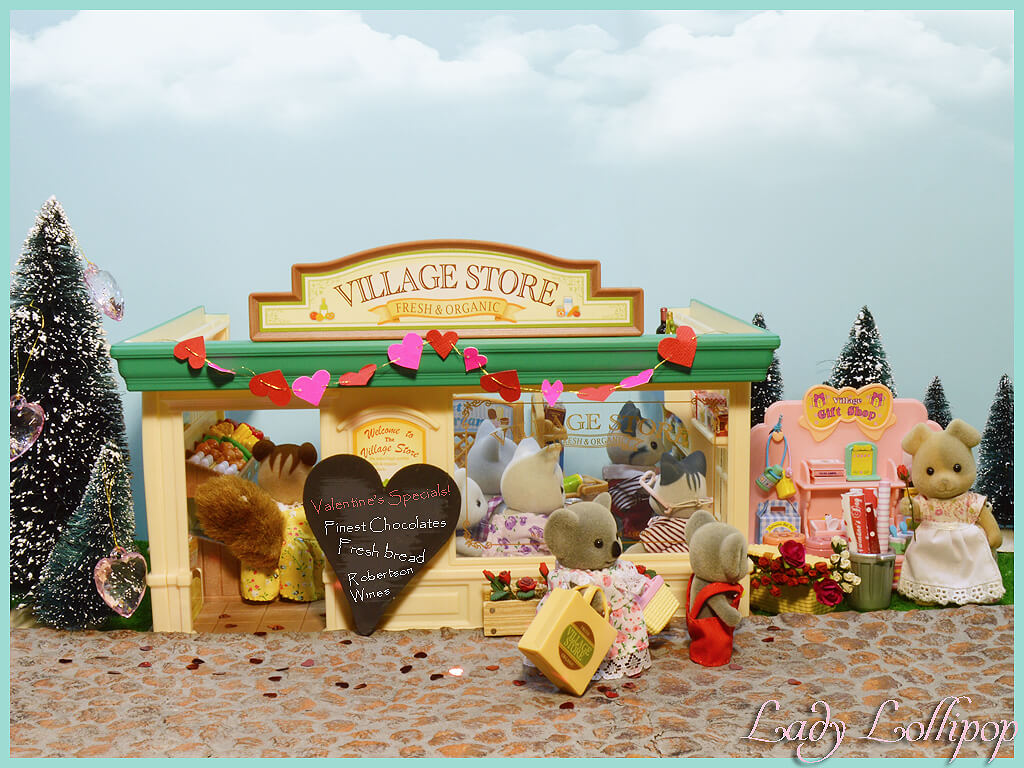 After all of the other items on Matilda's list had been ticked off, they made their way to Suzette Simpkins’ sweet cart on the edge of the park. The Simpkins' were a little busier than usual and it seemed that all of Rooibosch Hill wanted to buy sweets on this special day. Luckily Suzette had anticipated the Valentine's rush and she and her husband, Albert, had made plenty of sweets just for this occasion! 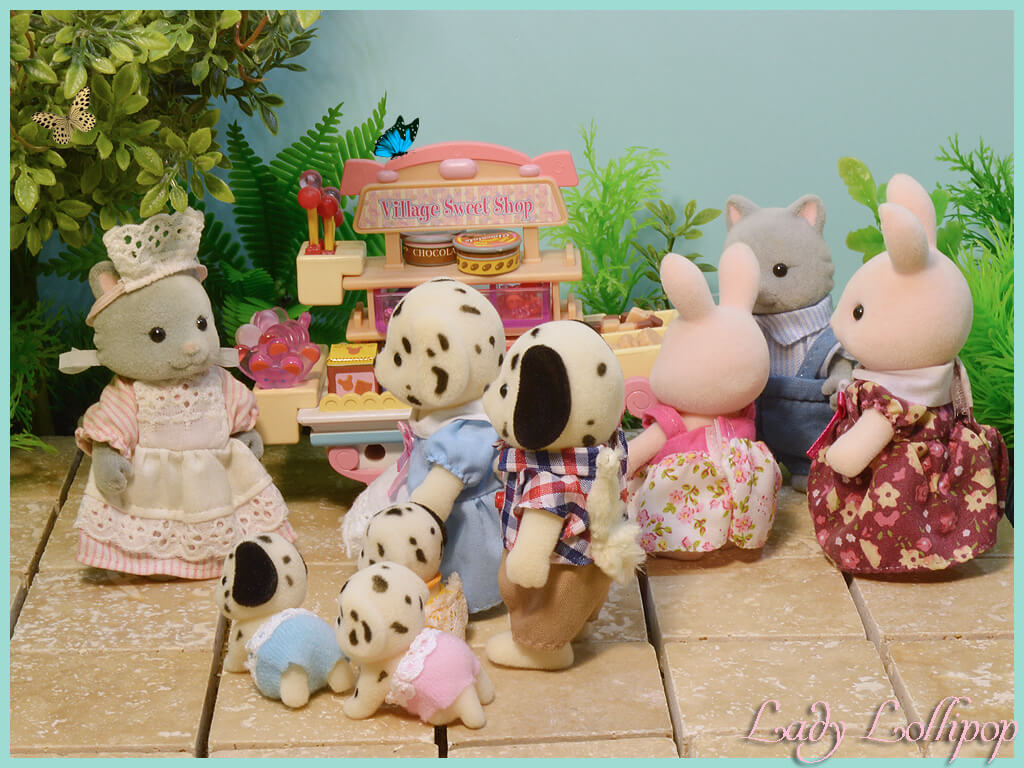 “Good day, dearies!” Greeted Suzette cheerfully. “What can I do for you today?”

“Good morning, Suzette. We are looking for some special candies for Valentine’s gifts today. Anything you could recommend?” Matilda gave a little wink to Clive as she spoke. 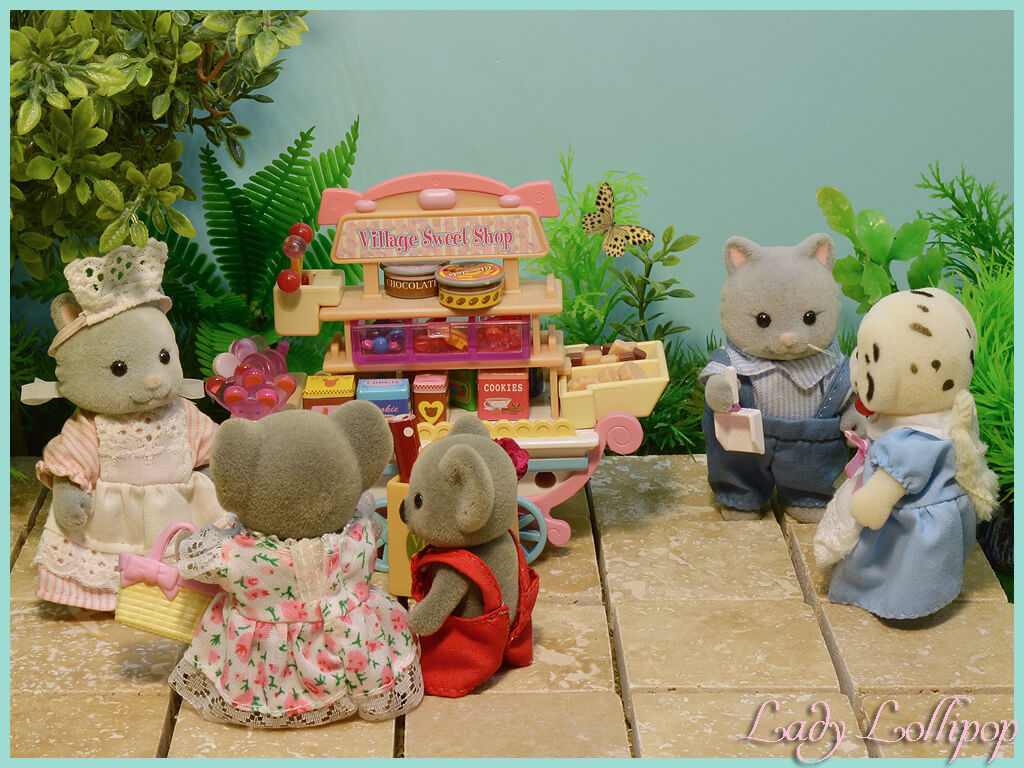 “Oh, of course! I have just the thing… Freshly made last night too.” Suzette smiled as she eagerly pulled out a handful of large, heart-shaped lollipops. 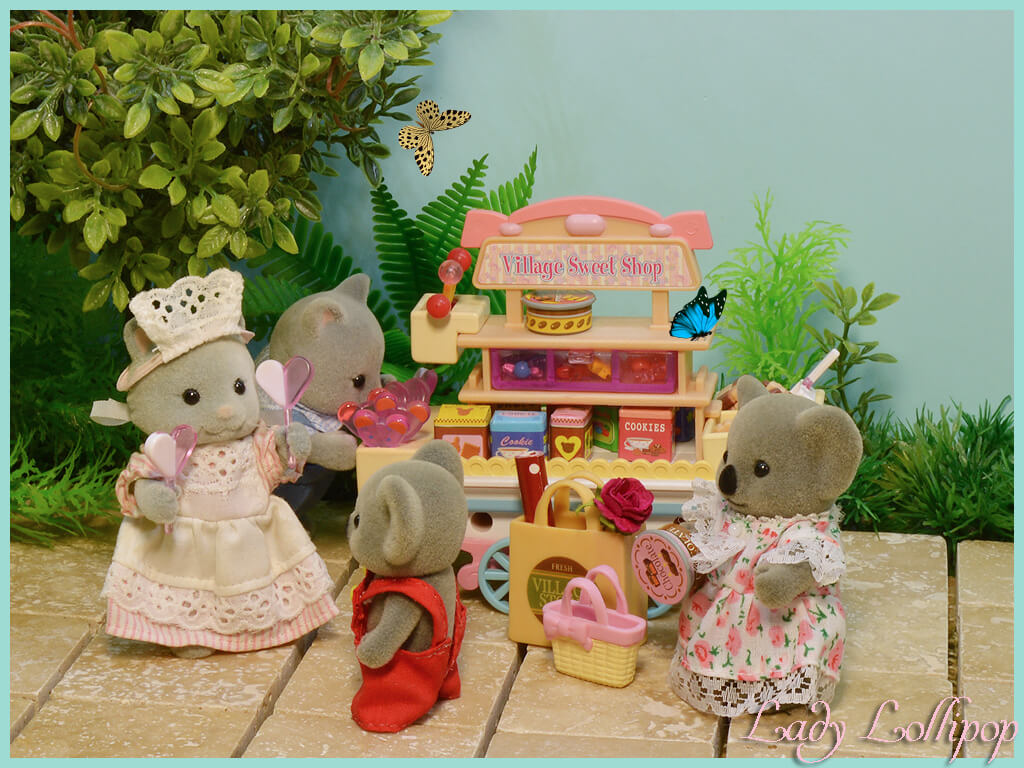 Clive was delighted with the lovely two-toned sweets and immediately took two. He counted out his money and had just enough to buy both.  Clive had to bite his lip to keep himself from running about the village square squealing with delight, waving a heart shaped lolly in each hand.

Matilda chose a box of chocolates and a pretty tin of sweets, thanked Suzette and after wishing her a happy Valentine ’s Day, took off after Clive, who was already skipping along a few steps ahead. 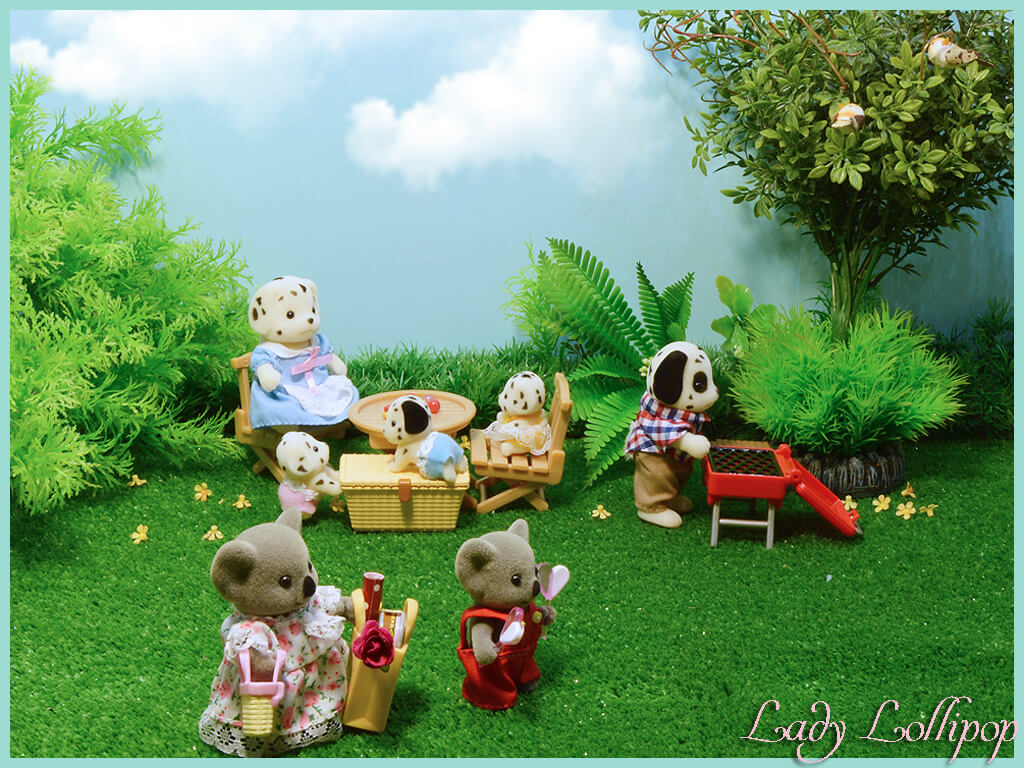 “Darling, who is the second lolly for?” Matilda asked in puzzlement when she finally caught up with Clive.

Clive abruptly stopped, turned to his mother and took a deep breath, puffing up his cheeks before letting it out slowly.

“Germaine”. He replied as he wrinkled his nose, turned and continued skipping along the path without another word.

Matilda could do nothing more than laugh at her son’s reaction. Even though the siblings didn’t always get along, Clive knew as well as his mother that there was more to Germaine’s foul mood than the anticipation of her Aunt and Uncle’s belated arrival. When they arrived home, Matilda hid the sweets before they could be discovered and Clive announced that he had to finish some homework before their guests arrived. Germaine was still in her room and Rolf seemed extremely happy to see his wife as he climbed out from under a mountain of pillows, toys and toddlers.

“Oh, my little Eucalyptus leaf! I am so glad that you are back, these little rug rats have been driving me nuts!” Rolf exclaimed with wide eyes as he motioned towards the babies playing peacefully on the floor. “Germaine is taking a lie down and hasn’t come out of her room since you left, I think she might have a bug.” 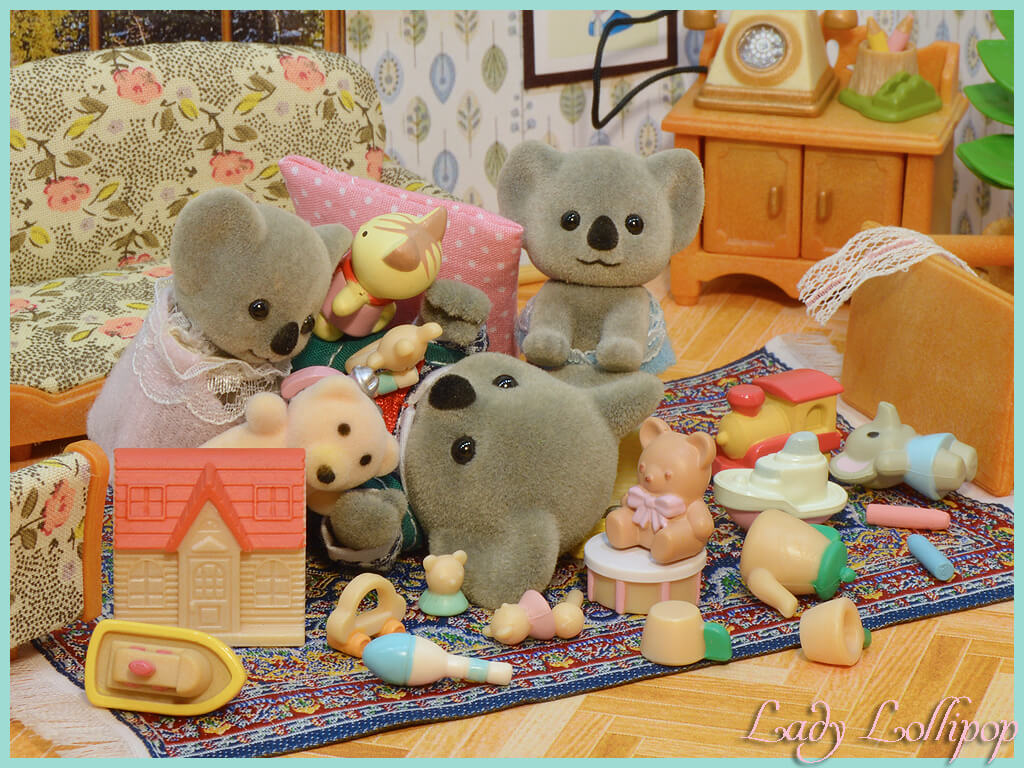 Matilda just laughed and reassured Rolf that everything would be fine with Germaine. Rolf looked quite puzzled as his wife brushed off his concern for their daughter and instead of discussing the matter, asked him to help her pack away the groceries. He decided that this was one of those moments that he would never understand how to handle and since Matilda seemed to have things under control, he decided to rather leave the matter be.

The two were just finished packing everything away when they heard a car pull up to the driveway and a heartbeat later both children came running into the kitchen ready to greet their relatives from so very far away.