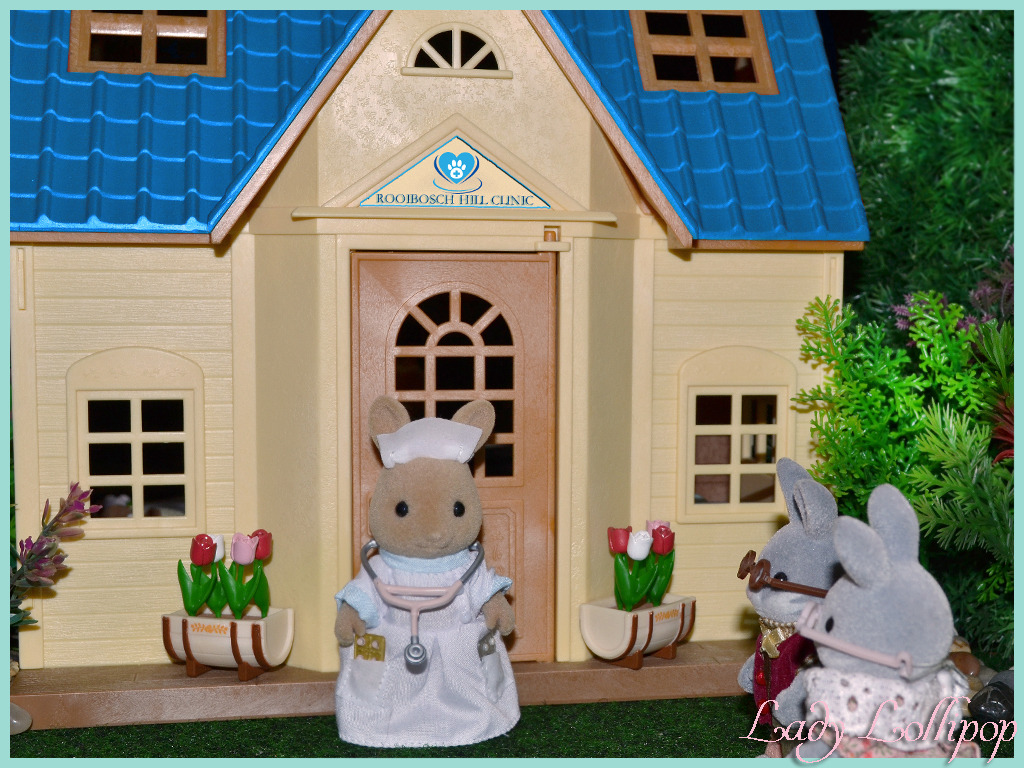 Upon arriving at the day clinic, the Cottontails found head nurse Marjorie Bunny already waiting for them at the door.

“Hallo there, lovies!” She greeted with a warm smile. “I am the head nurse at the Rooibosch Hill day clinic, my name is Marjorie Bunny. Everything is ready; we have been waiting just for you. You are in good hands now Mr Cottontail.”

Christopher was quite scared, but the beautiful young bunny with her bright smile eased his worries a bit. 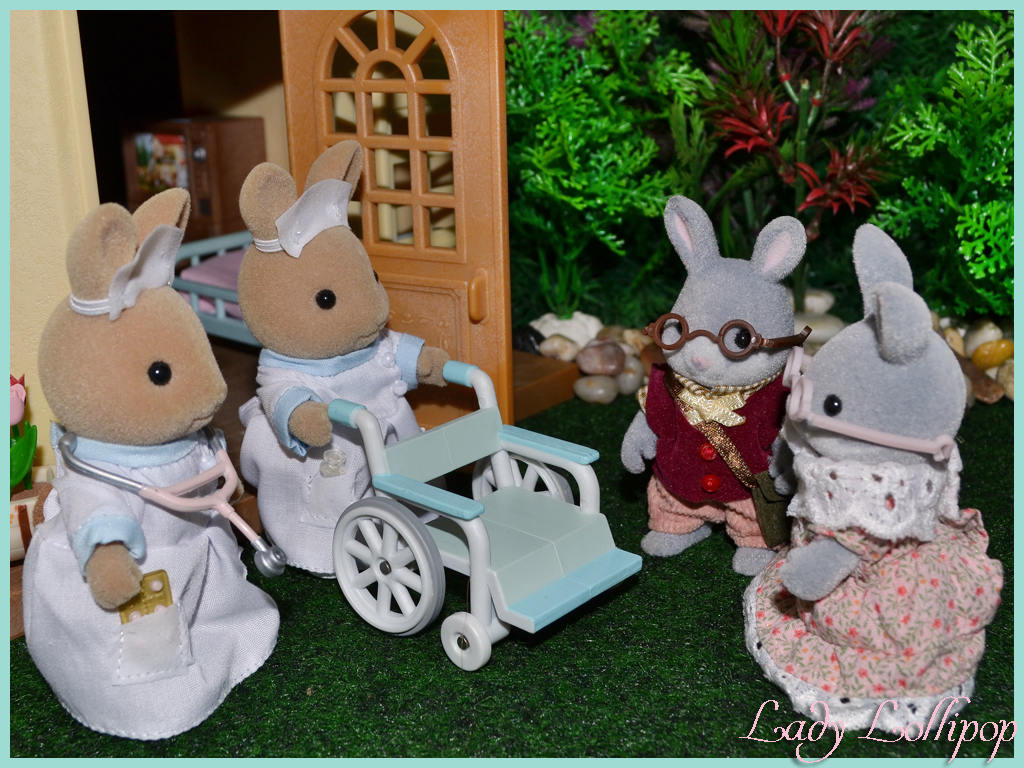 Nurse Marjorie didn’t give Christopher much time to ponder on his fears, and before he knew it, a second nurse, introduced as Emily Nightingale brought a wheelchair out to him. Christopher was getting very tired from standing up for such a long time and he accepted the help into the wheelchair gladly. Carmen Cottontail bent down and gave Christopher a long hug and showered her husband in kisses.

“See you soon, honey”.” Christopher told her. “I have these two lovely ladies to look after me now, so you go home and get some rest. It has been a long night and you must be so tired looking after me these past few weeks.”

The two said their goodbyes and Nurse Emily took Christopher inside. Carmen stayed a while to chat with Nurse Marjorie about the procedure and to fill in the paperwork before she went home to rest. 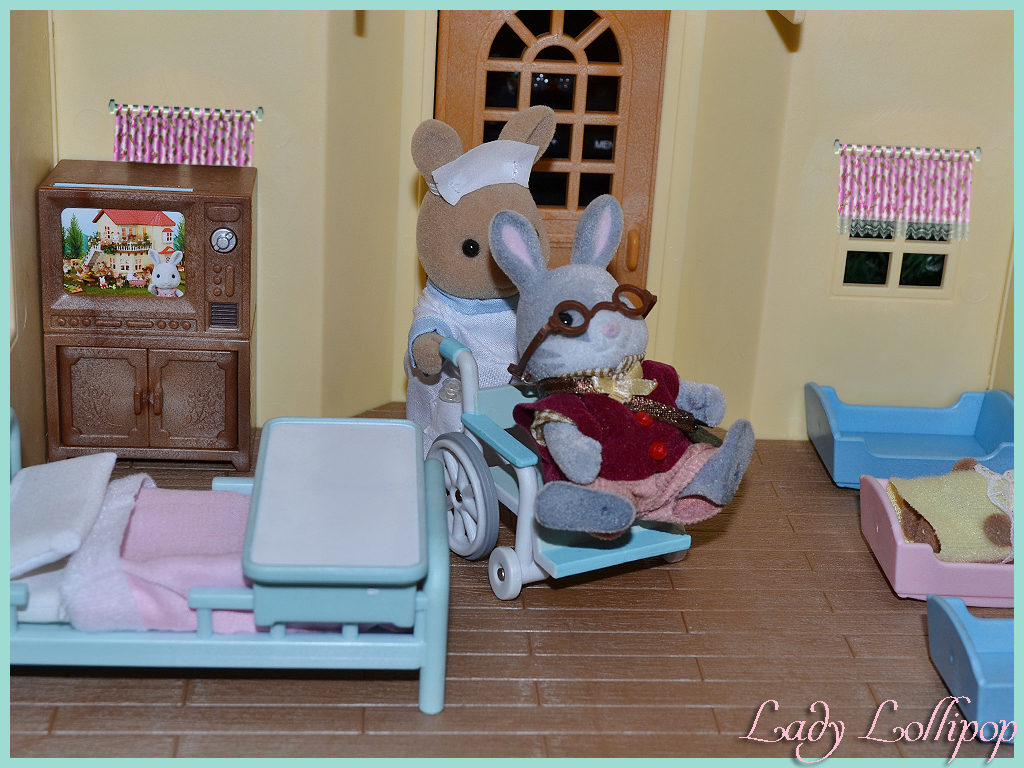 Nurse Emily chatted cheerily with Christopher as she pushed him along in the wheelchair. She told him about how she and her sister, Nurse Marjorie used to work in two different hospitals in different parts of Sylvania and how they finally managed to get a job at the same hospital here in Rooibosch Hill. Of course the hospital has not been built yet and they are currently still running things out of Nurse Emily was also very excited to tell Christopher about her husband who would soon be joining them here at the hospital as the new intern doctor.

Christopher liked Nurse Emily’s melodic chit-chat and found it quite soothing to be in her presence. Before he knew it, the two nurses had him settled in his room. Nurse Emily took a blood sample while her sister soothed Christopher’s nerves. He wasn’t accustomed to being in a hospital and he certainly wasn’t used to being around nurses and doctors. Since he was a young boy, Christopher had avoided doctors and hospitals as much as he could and even in his retirement he only ever self-medicated with home remedies and herbs from the pharmacy. 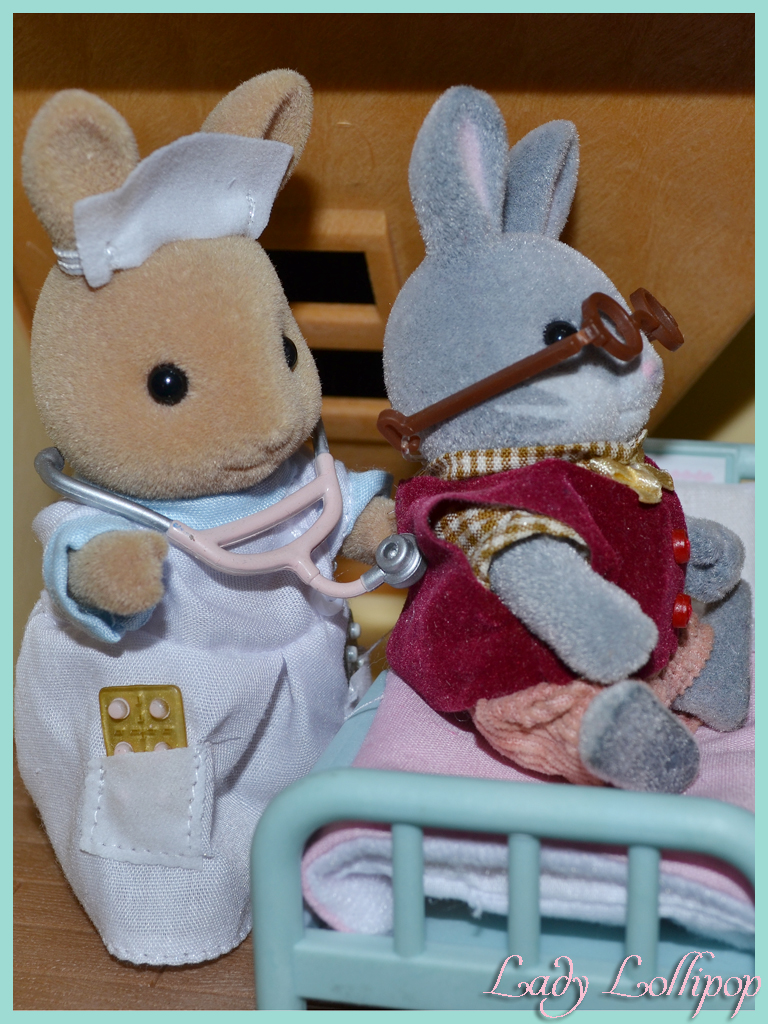 After that, Nurse Marjorie listened to Christopher’s heart and lungs, took his temperature and measured his bloodpressure. The nurses asked him all sorts of questions about his medical history and how long his symptoms have been bothering him.

Christopher felt very uncomfortable with everything going on around him, as he was always a very private bunny and did not like to talk about himself much. He always believed that everyone in Sylvania does not need to know your ins and outs. 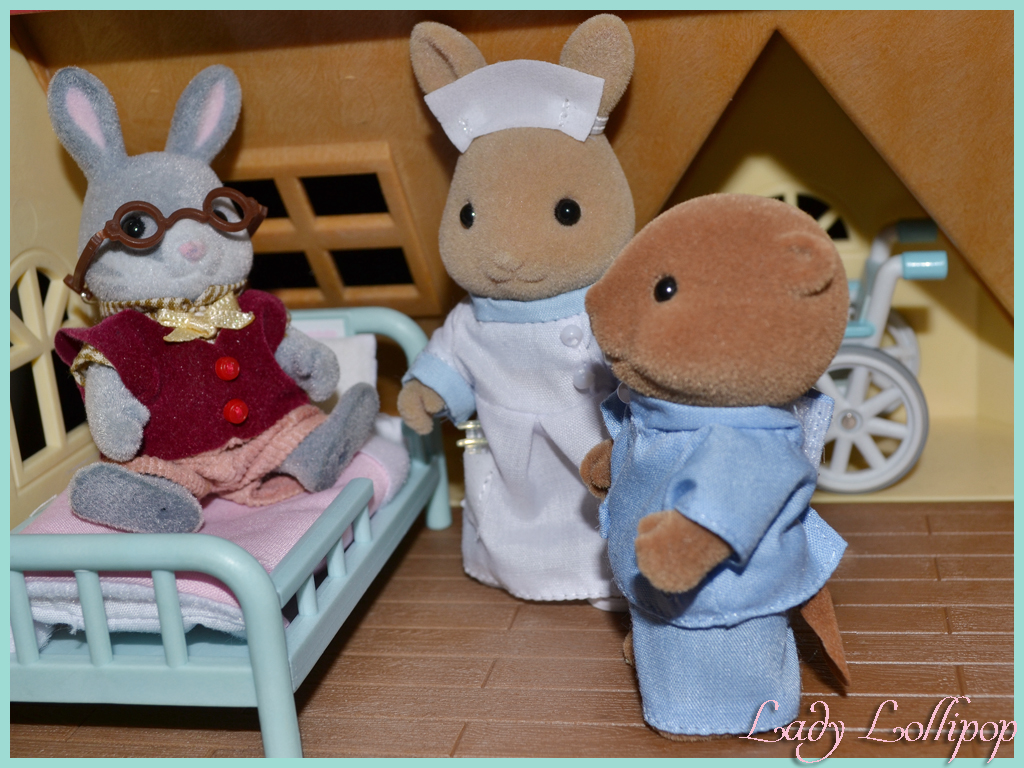 Finally Christopher met Dr William Waters, Dr Ben Beaver the dentist in Rooibosch Hill’s cousin. Dr William had a chat with Christopher and after examining the nurses’ notes, he asked Christopher to get up so that he could examine his tail. 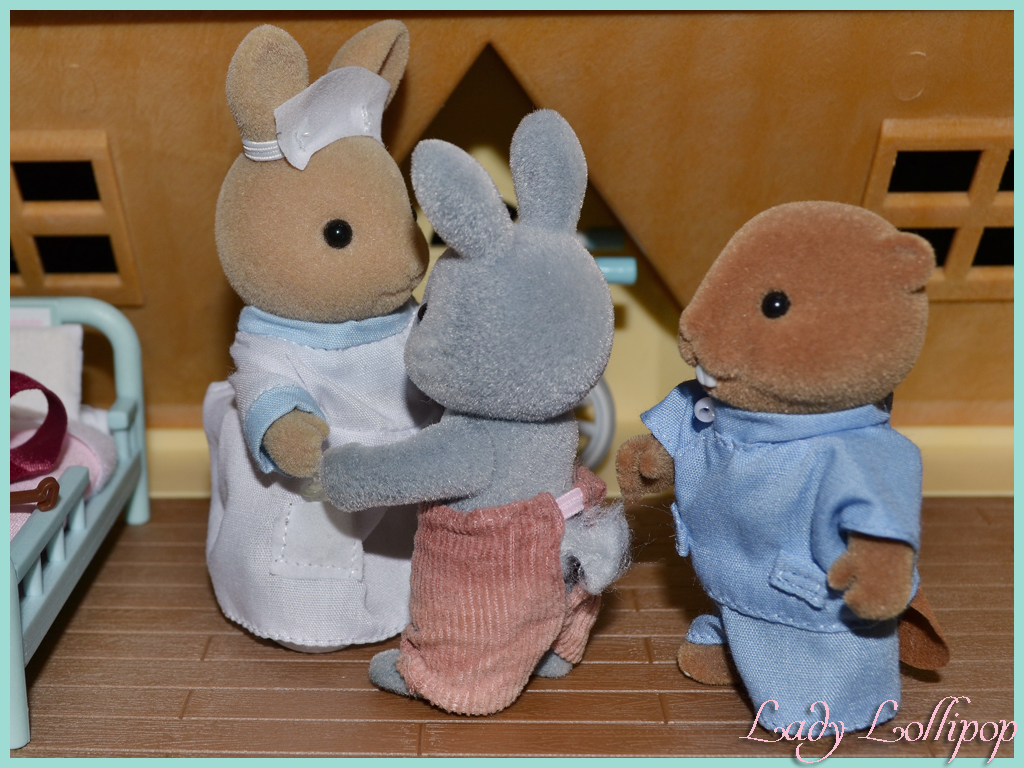 Nurse Emily helped to steady the shaky Christopher Cottontail while Dr William examined Christopher’s tail. Dr William told Christopher that he had asked Dr Eustace Truffle, the orthodontist in Rooibosch to assist him in the procedure. It was such short notice that they didn't have time to wait for an anaesthetist from one of the other Sylvanian villages, so they had to make do with the local dental surgeon this time. They talked about the procedure that they were going to perform on Christopher and Dr William answered all of Christopher’s questions before he went off to get ready to perform the operation.

Nurse Emily cheerily helped Christopher into the white hospital gown before helping him back into the wheelchair and pushing him off to the operating theatre. By this time, Christopher Cottontail's nerves were on edge and he was very worried for the procedure to come. It felt a lot like the world was spinning around him as the nurse pushed him down the corridor to the operating room. 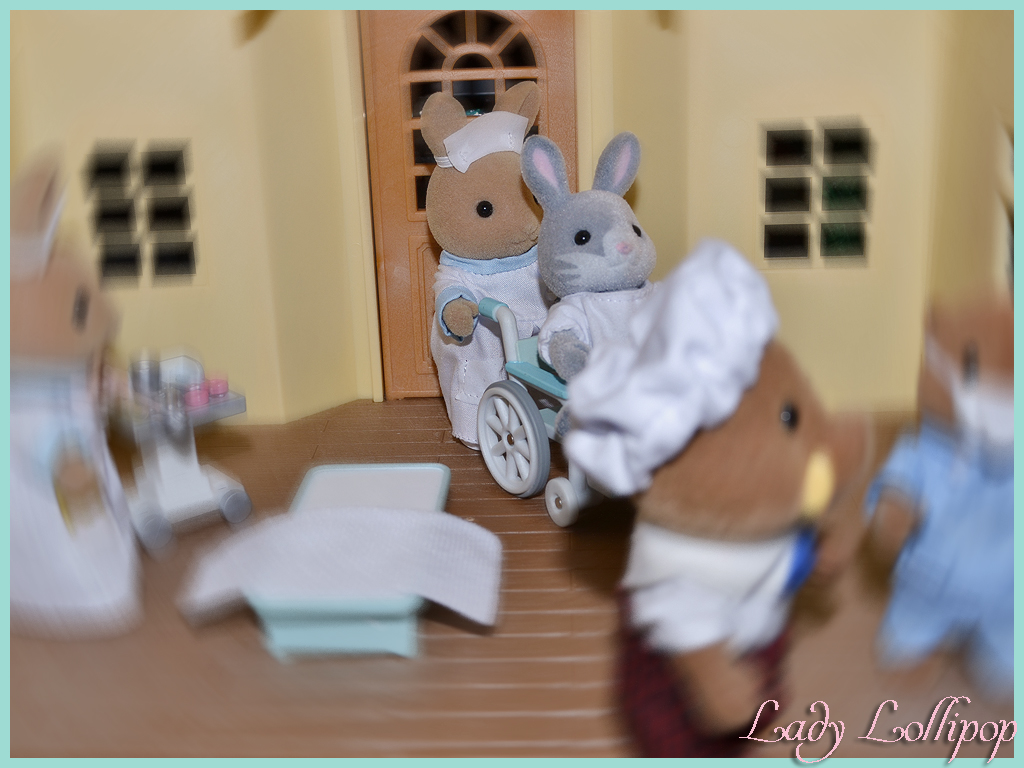 In the operating theatre, it was cold and too bright. Christopher could hardly recognise Dr William and Dr Eustace in their theatre garb outfits. Everything looked so cold and scary that his nerves got the better of him, despite his lovely nurses’ comforting words, that he seriously considered getting up and hopping away as fast as his little bunny feet could carry him.

Only, he realised that with the amount of pain that he was in due to his illness, that he would not get very far and it would certainly not be more fun to hop away while insuch pain than it was to grit his teeth and go through with the operation. Dear old Christopher Cottontail was so caught up in his fears that he didn't really notice what was going on around him and suddenly his young nurse's voice broke through his thoughts, jolting him back to reality.

“Don’t worry, Mr Cottontail.” Nurse Marjorie soothed. “I will stay right here by your side the whole time. You have nothing to worry about, just hold onto my hand tightly and it will be all over soon.”

With that, the anaesthetics took hold and Christopher Cottontail drifted off to sleep. 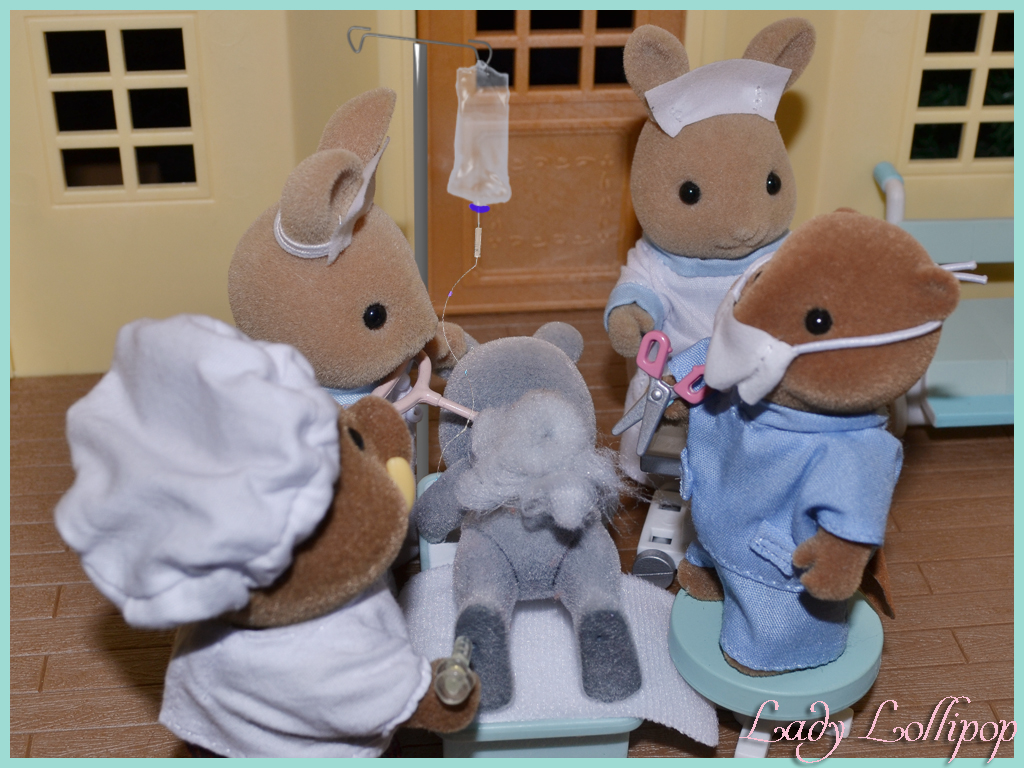 The operation took the four medical personnel most of the night and as they worked on Christopher, they chatted about his wonderful friends and how much they must care for Christopher to go to such lengths to see him well again. While the two doctors worked, Nurse Marjorie kept her word and stayed by Christopher’s side, stroking his ears and holding his hand until the operation was done. 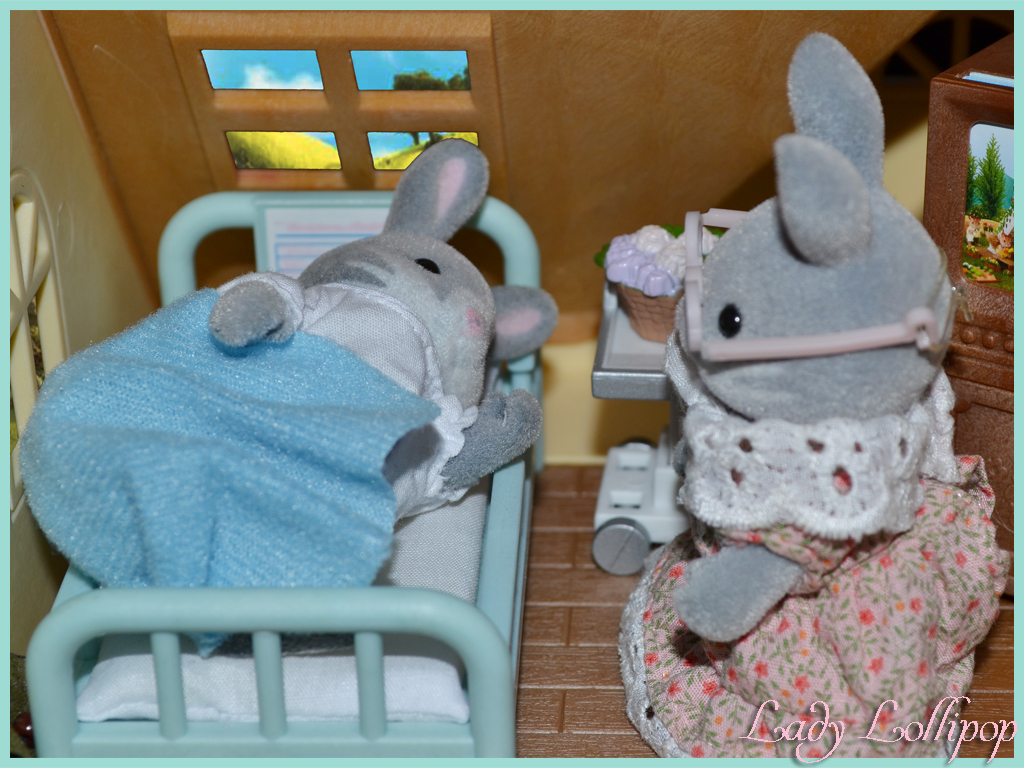 Christopher slept soundly for the rest of the night, only briefly waking up when someone asked him to say his name and how he felt, but he drifted off again almost instantly. When he finally awoke, he found himself back in his hospital room, the sun shining in through the windows. His wife, Carmen, was sitting on a chair, reading the Country Times. For a moment, Christopher didn’t know where he was, but when he tried to move, he suddenly remembered the operation from the night before as the familiar pain greeted him.

“Oh good, you’re awake!” Carmen said cheerfully. “The nurses tell me that the operation went well and that you slept like a baby the whole night. Poor dears, probably had to put up with your snoring the whole time too, but they are much too polite moan. Oh, I am so glad to see you well!” 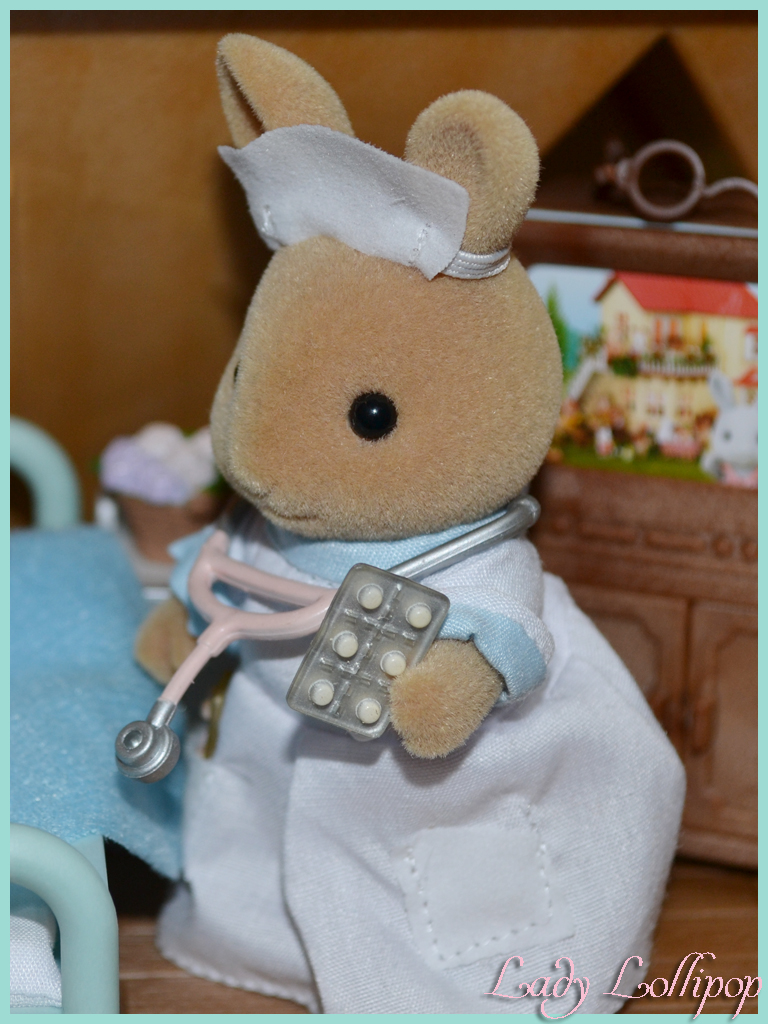 Nurse Marjorie brought Christopher his medication and told him that the pain would subside soon.

“You have some amazing friends, Mr Cottontail.” Nurse Marjorie commented. "They have been calling and bringing gifts and cards all morning. You must be one very special bunny!"

“I don't know about being a special bunny... But you are right about the amazing friends that I have.” Christopher answered before the medication put him to sleep again. 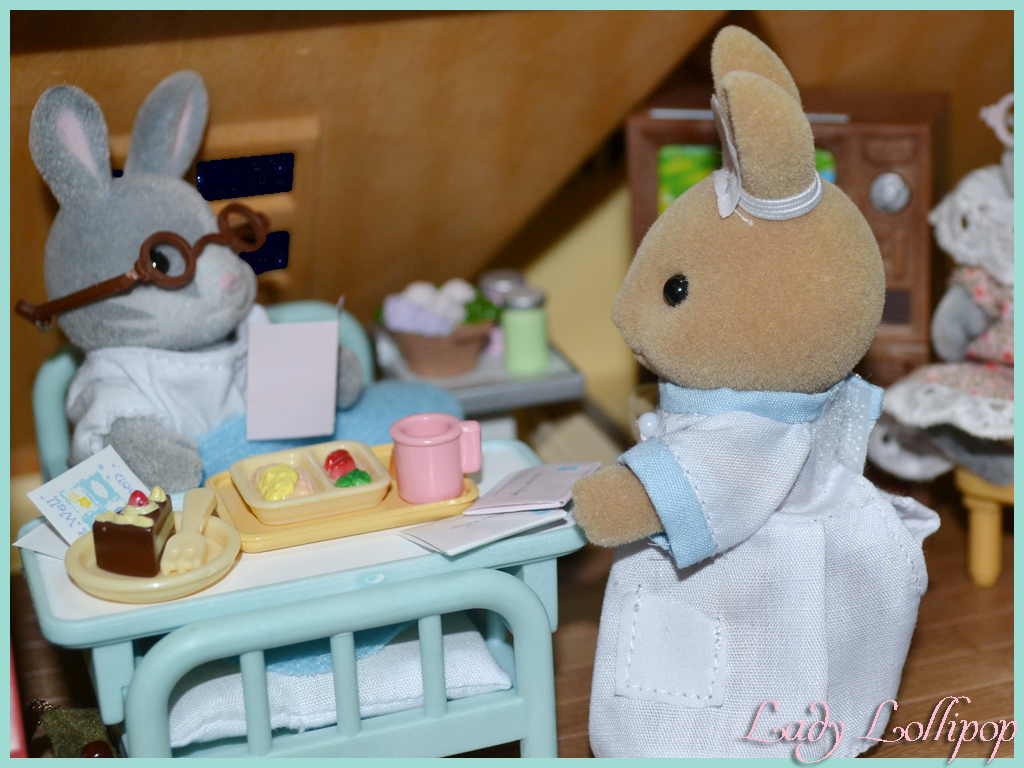 When Christopher woke again, Nurse Emily was busy putting out his dinner on a tray for him while happily chatting to Carmen.

“I have a special treat for you, Mr Cottontail.” Nurse Emily chimed with her cheery voice. “You get cake for dessert! I baked it myself, just this morning.”

“Thank you dear, you are too kind. I am truly glad that you and your sister have transferred to Rooibosch Hill. We are very fortunate to have the finest nurses in all of Sylvania at our clinic.”

Christopher praised while opening the envelopes that Carmen had placed before him. They contained well wishes from all of his friends and family and even from some caring critters that he only knew from seeing them around the village and having the occasional chat at a shop or while waiting for the bus. The story of Christopher Cottontail's big health scare was widely know through all of Rooibosch Hill now and he blushed at the thought of being discussed by all the neighbors. 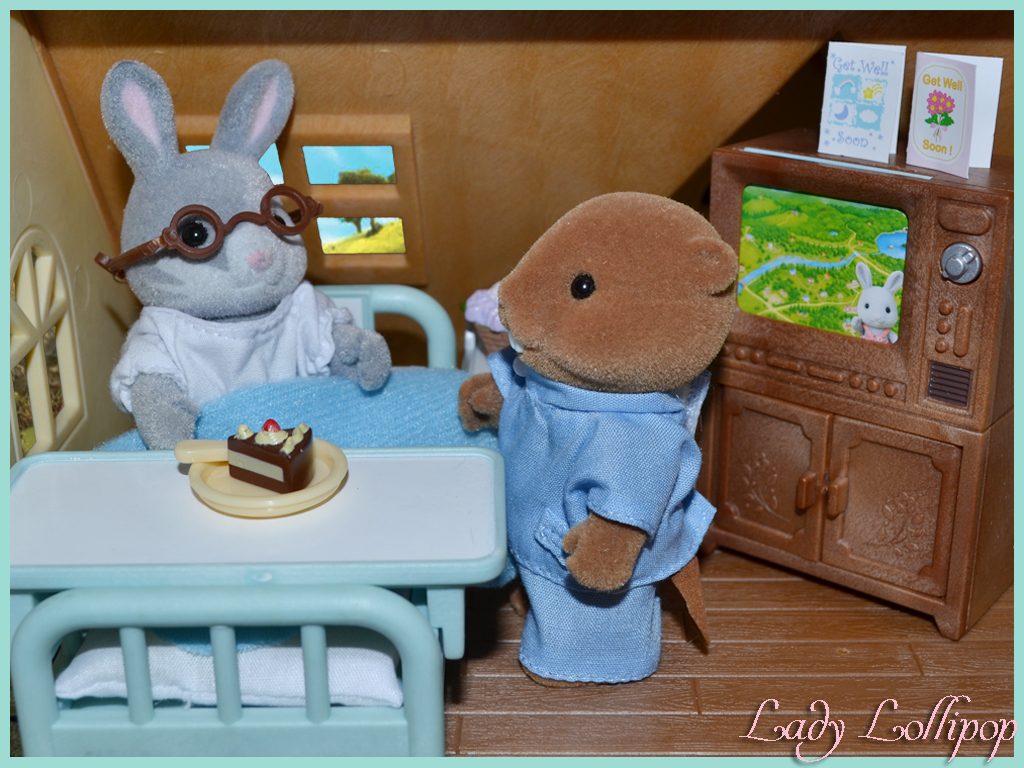 Finally, the next morning, Dr William came to see Christopher.  He told Christopher that he was very happy with how the operation went and that Christopher would be able to go home in two more days.

“The pain should be totally gone by then and you should have no further complications as long as you take it easy for a few weeks and give everything some time to heal.” Dr William told Christopher with a smile. "I believe we have managed a medical miracle here, Mr Cottontail!"

“Thank you very much Doctor! That is the best news I have heard in a long time. After such a good rest, I feel better already.” And Christopher was feeling much better, although he blushed at the thought of being bed-ridden for such a long time. 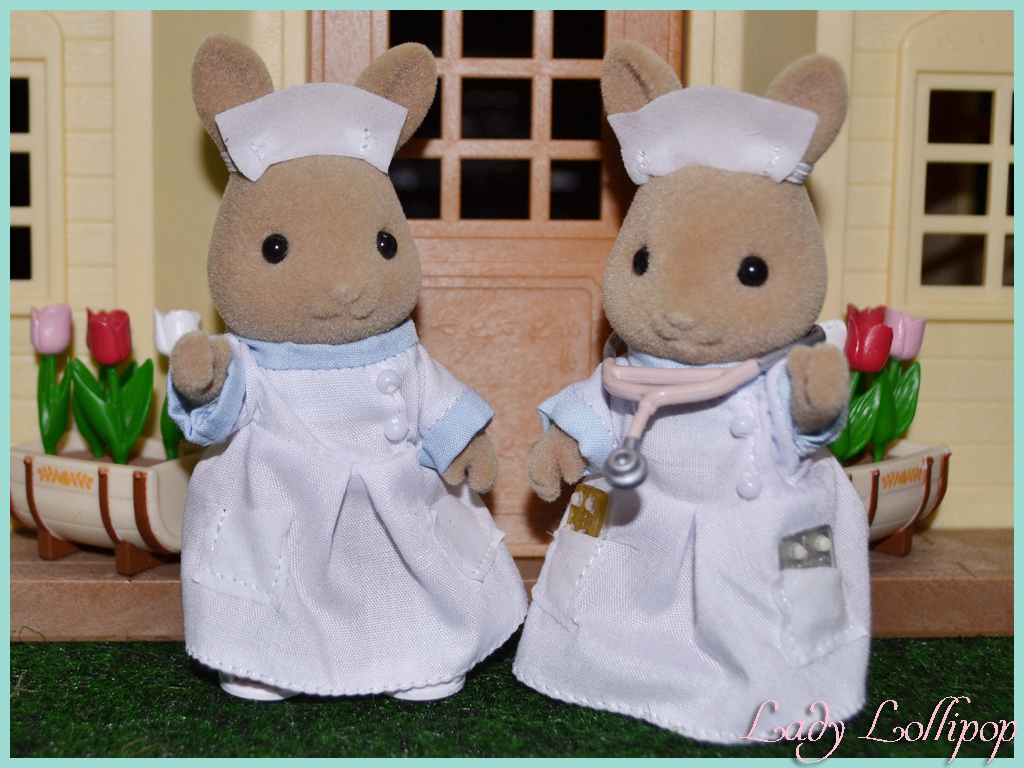 Time went by in a flash and Christopher Cottontail enjoyed talking to the two nurses who kept him company. He noticed that the little day clinic was not very busy and every patient who came in, left with a big smile on their face. The sisters told him about the big plans that were being drawn up for a new hospital and about nurse Emily's husband who would soon be joining them at the clinic. But he also came to learn of the financial difficulties that they faced in such a small little village and how hard Mayor Bill Waddlington was working to get proper funding for a hospital.

Two short days later, Christopher and Carmen were once again on their way back home. Christopher’s tail had healed well and he almost felt like a brand new Sylvanian! He and Carmen waived their goodbyes to Nurse Emily and Nurse Marjorie and Christopher promised to come back for a visit when Nurse Emily’s husband had arrived.