The rain splattered and sploshed against the windows of the Nightingale nurses' little cottage. Outside the Rooibosch Hill Day-clinic, the wind blew the leaves off the trees and made a right mess all around. It had started to rain again sometime during the early morning hours and it was turning out to be yet another miserable, rainy day in Rooibosch Hill. 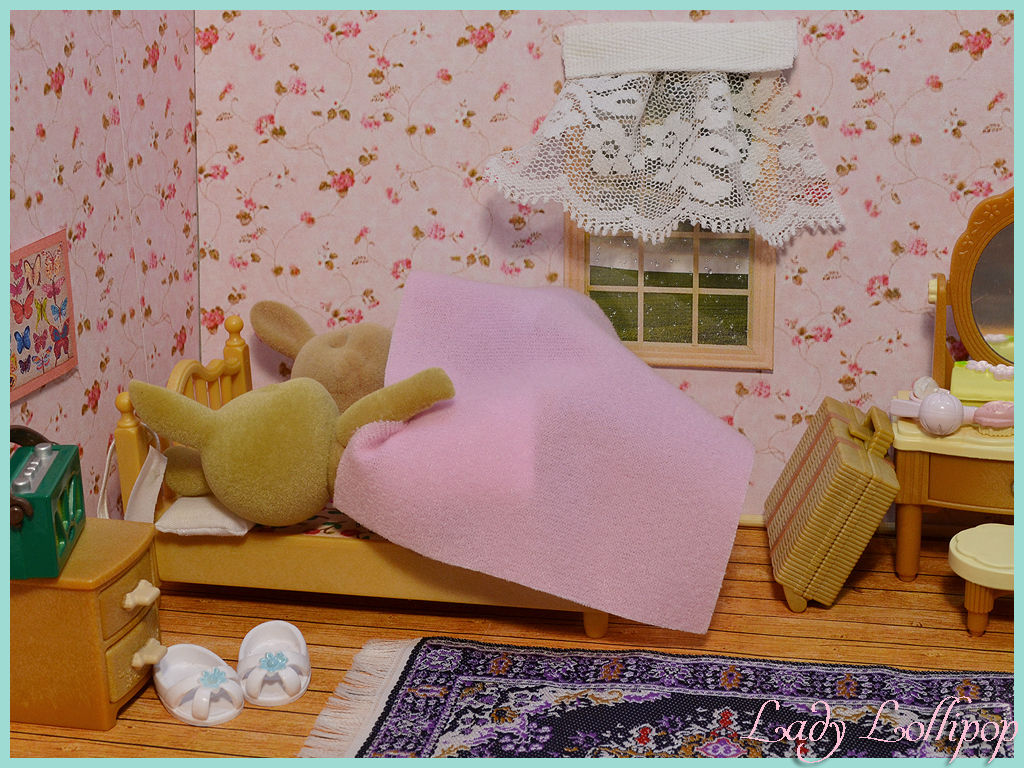 Inside the Day-clinic, Nurse Emily Nightingale lay sound asleep, dreaming of her husband Thomas who had missed their rendezvous of the previous day. Reluctantly Emily stopped drifting in and out of her slumber and returned to the real world with a heavy heart. Her first thought of the day was of her husband and the events of the previous day and at once she wished that she could drift back to sleep and forget about her heartache. Emily listened to the rain lashing at the windows for a bit, feeling even more melancholy than before and with a deep sigh she finally opened her eyes…

At first, Emily thought that she really had drifted back to sleep and was dreaming. She blinked her eyes a few times, rubbed them with her hands and blinked again, but what she saw before her still did not change - Thomas was home! 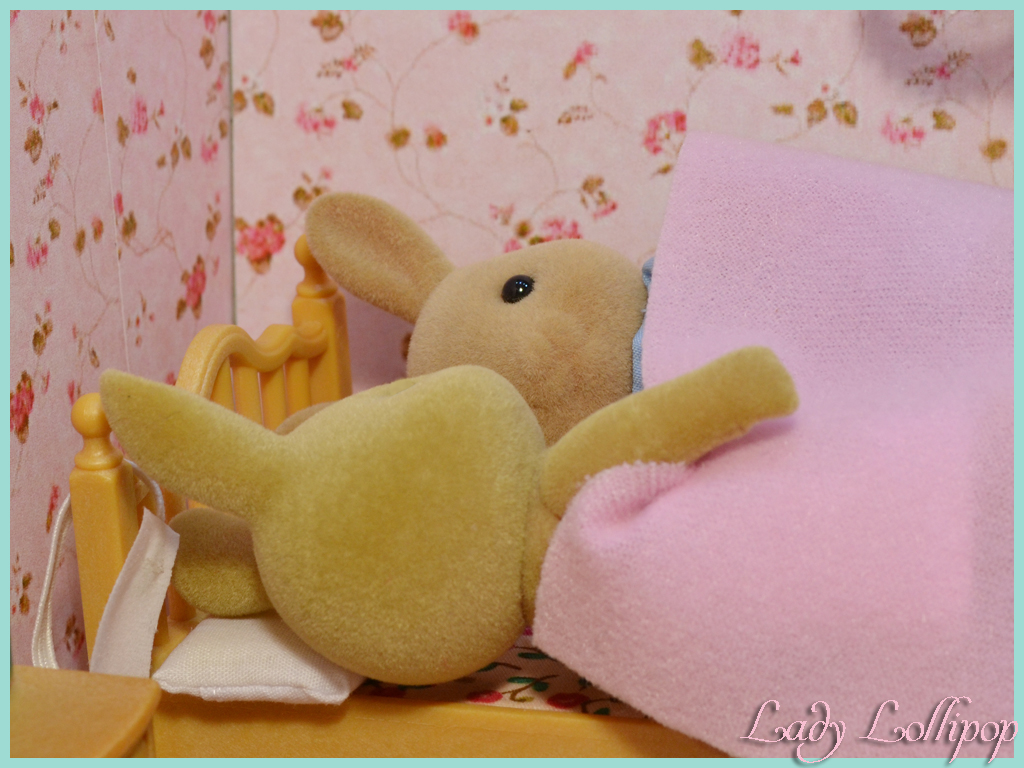 Thomas Nightingale lazily stretched out and gave a big yawn before turning back to face Emily. The look on her face was utter disbelief, she stared at him wide eyed and open mouthed, not managing to get a word out or make an intelligable sound.

At that, Emily broke down in tears and hugged and kissed Thomas, nearly smothering him in-between the, “Where were you’s” and the “I was so worried’s”.
Neither of them had gotten much sleep the previous night, and they decided to stay in bed for just a little while longer while Thomas told Emily about his amazing journey. 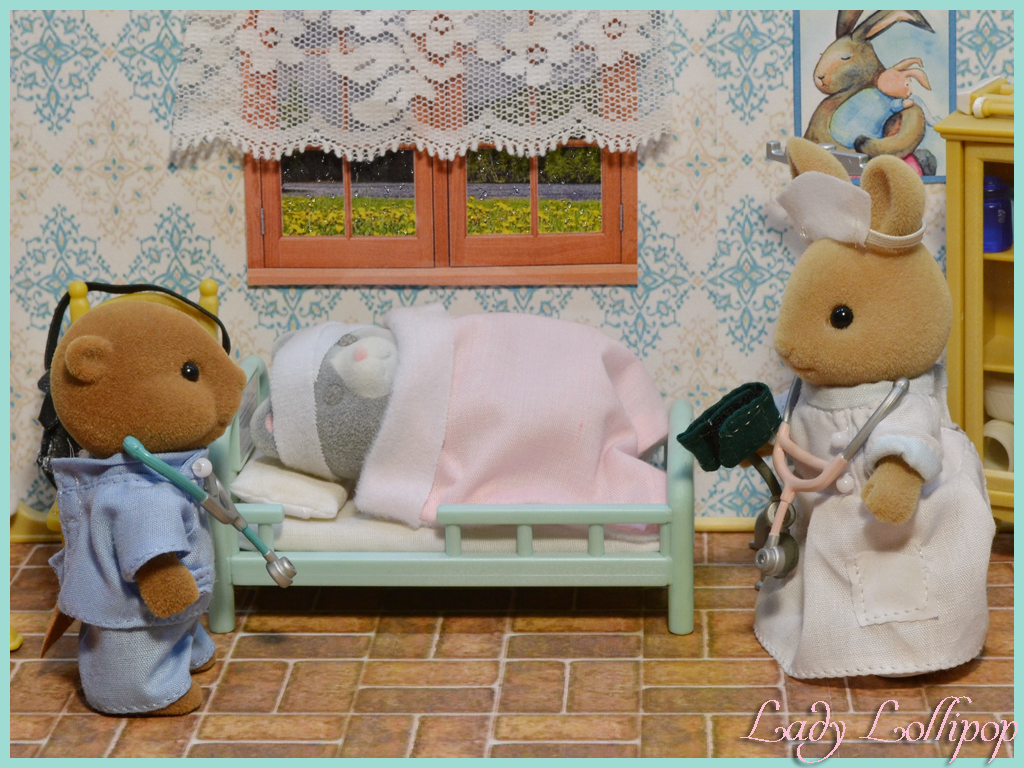 Downstairs, Marjorie and Doctor Beaver were busy checking up on their new patient when they heard Emily's excited shrieks. Marjorie giggled at the thought of her sister's flustered expression - finding her missing husband next to her in bed when she awoke would certainly be a big surprise!

By the time that Thomas had calmed Emily down from her excitement, answered all of her questions and managed to drag her out of bed to go downstairs, Marjorie was just about finished preparing breakfast. 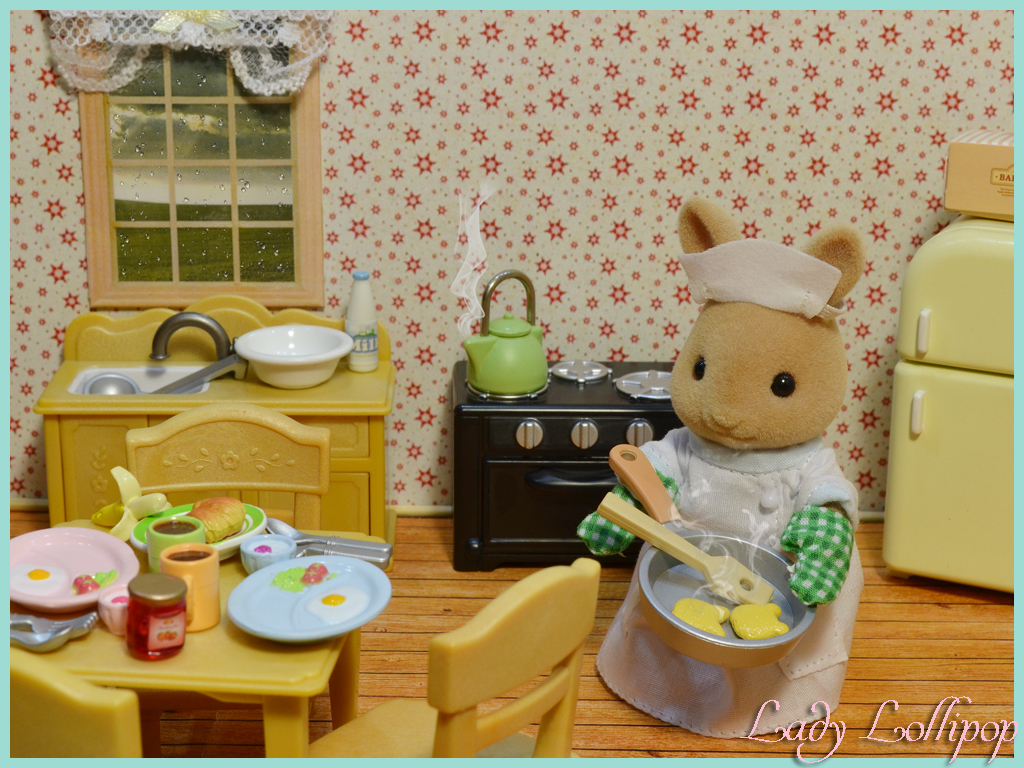 “Good morning honey-bunnies!” Marjorie teased the two as they sat down at the breakfast table.

Emily was too happy to care about her sister’s taunts and Thomas was too tired to comment. 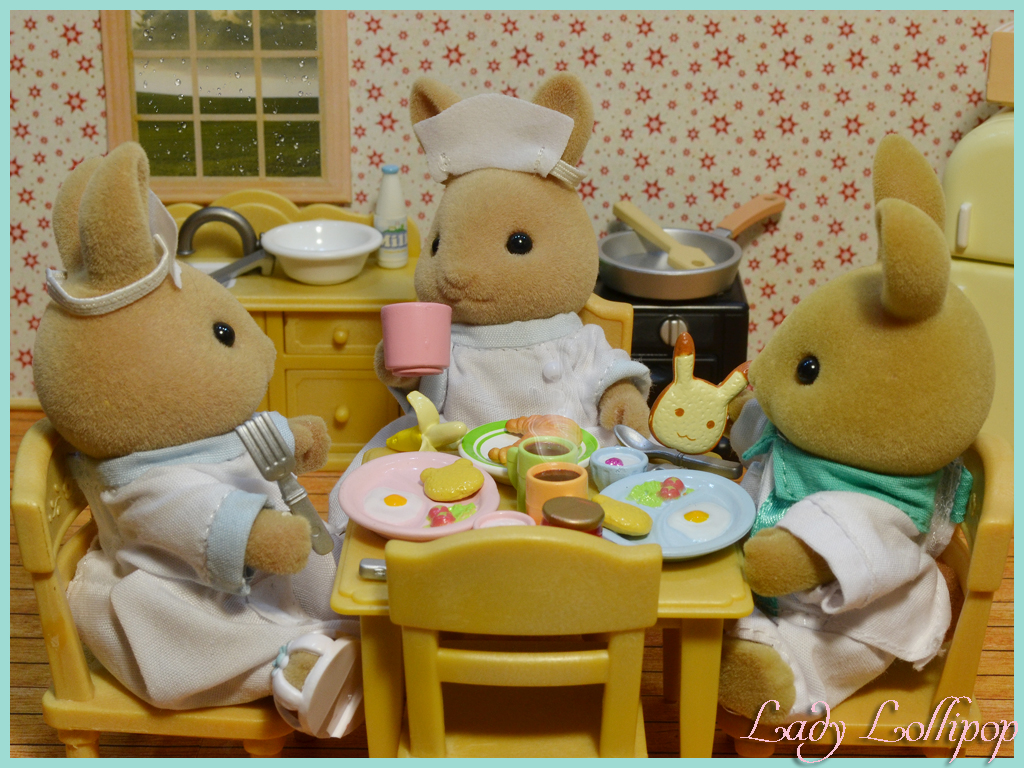 “Well.” Marjorie started. “We could always keep him here in the clinic until someone claims him. We can alert Bobby Roberts about him and see if he can track down his parents while we look after him.”

“Margie, you are making him sound like a lost pet!” Thomas laughed.

“Oh, I don’t think it is such a bad idea, Thomas.” Emily thought out loud as she took a big bite of her bunny-waffle. “Perhaps his family doesn’t even know that he is gone yet. And who is more qualified to look after a little injured boy than two nurses?”

“I called Doctor Waters over early this morning, he was going to leave for home today but decided to make sure that the little guy was doing fine before he left.” Marjorie told the two. “He has already gone over the boy and said that the bump on his head and a broken leg are the worst injuries we have to worry about, the others are all just scrapes and bruises, nothing too serious. He thinks that our little patient might have had a nasty tumble from a tree before Thomas found him.”

“Well, that is a relief!” Emily sighed. “Now we just have to get him awake so that he can tell us who he is!”

After breakfast, Emily tucked Thomas back into bed. He had carried the poor boy such a long way and was feeling quite tired still. Emily fussed about him for a bit, cleaning up his clothes and unpacking his things before she finally went down to get to her duties.

Marjorie was busy changing the IV that Dr. Waters had set up for their mystery patient when Police constable Bobby Roberts walked in, quite wet from the steady downpour of rain outside. 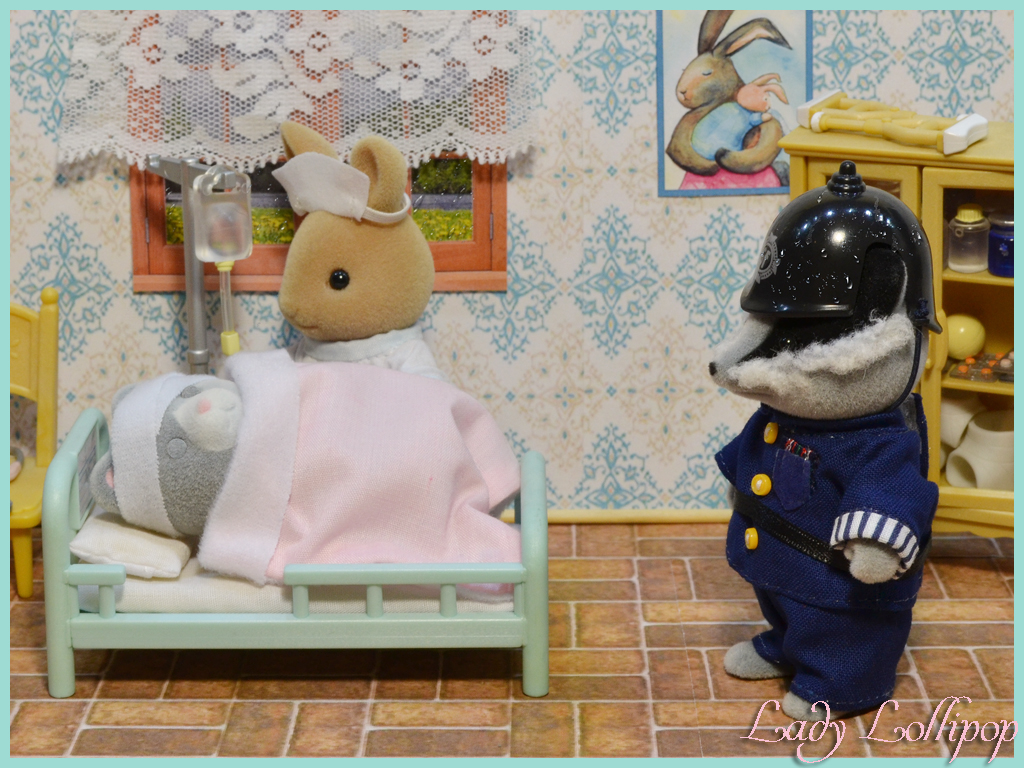 After taking down a proper description of the little bear, Bobby followed the two nurses to the kitchen in search of a mug of something to warm him up.

The two nurses did a thorough recollection of the previous day’s events over a mug of hot cocoa and biscuits, while Constable Bobby took notes in-between lots of munching and nodding.

“Well ladies, I assure you that I will do all I can to find the boy’s family.” Constable Bobby happily said with a reassuring smile as he stood up. “Such a brave young lad...”

“Thank you constable, if anyone can track them down, it is you.” Marjorie replied as she got up to walk Bobby to the door.

It was already after lunch when Thomas finally crept down the stairs and joined the nurses in the clinic. The story of his great adventure had spread like wildfire all across Rooibosch Hill and there had been a steady stream of locals paying a visit to the day-clinic just to bring a welcome gift for Thomas, offer a kind word, or to sneak a peak of the mysterious boy that they had heard to be visiting the clinic. As the day wore on, the weather cleared up a bit and the wind died down, leaving only grey skies and the occasional drizzle overhead. 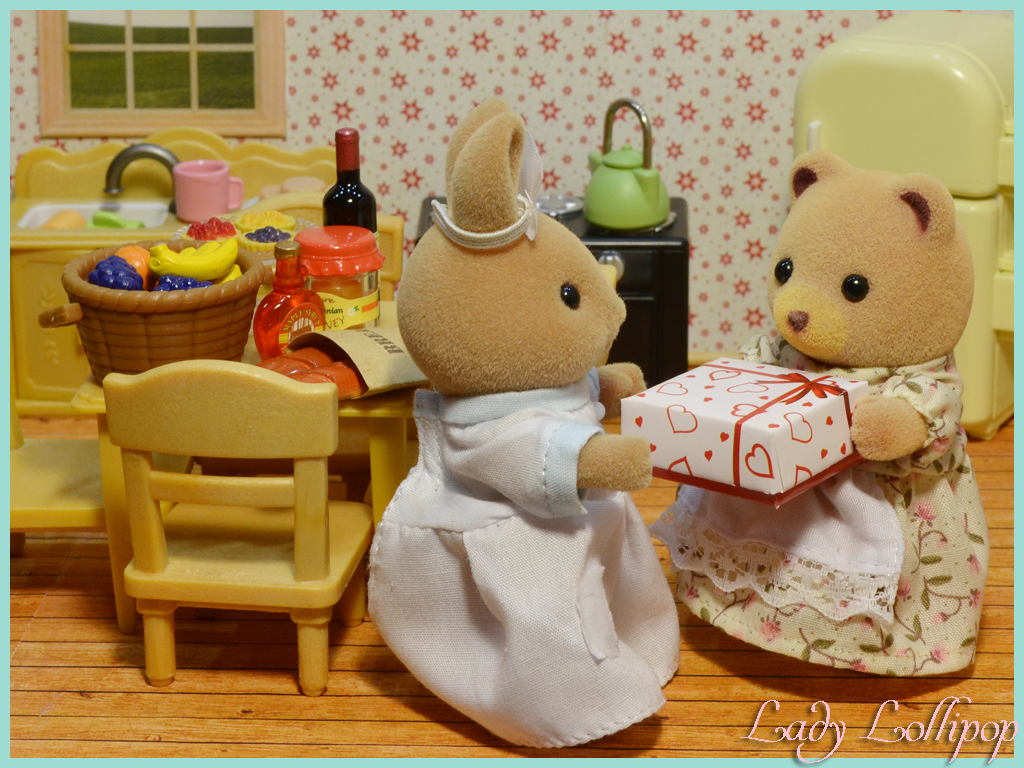 “Thank you for stopping by Laurel, and thank you for the kind gesture of offering the boy a home, Cuthbert. I am sure that he will find it much more comfortable than this little clinic when he gets better!” Nurse Emily said as she saw the Porridge family off at the door.

“No problem, Em! We would be glad to take him in. What is another breath around the house with six of our own, eh?” Cuthbert Porridge giggled as they said their goodbyes and took their leave before it started raining again and they got caught.

As Emily closed the door, she thought she heard a faint voice calling.

Marjorie and Thomas looked at each other and back at Emily. Suddenly all three realised that the cry must have come from their patient! They jumped up and hurried over to his bedside.

Emily dabbed at his forehead with a damp cloth and as she pulled her hand away, the young boy opened his eyes. He blinked a few times, frowned a bit, and just like that, went back to sleep.

The three sighed in unison. They still didn’t know who the little bear was, but at least they had gotten a response from him and if all went well, in a few days his family would come looking for him.