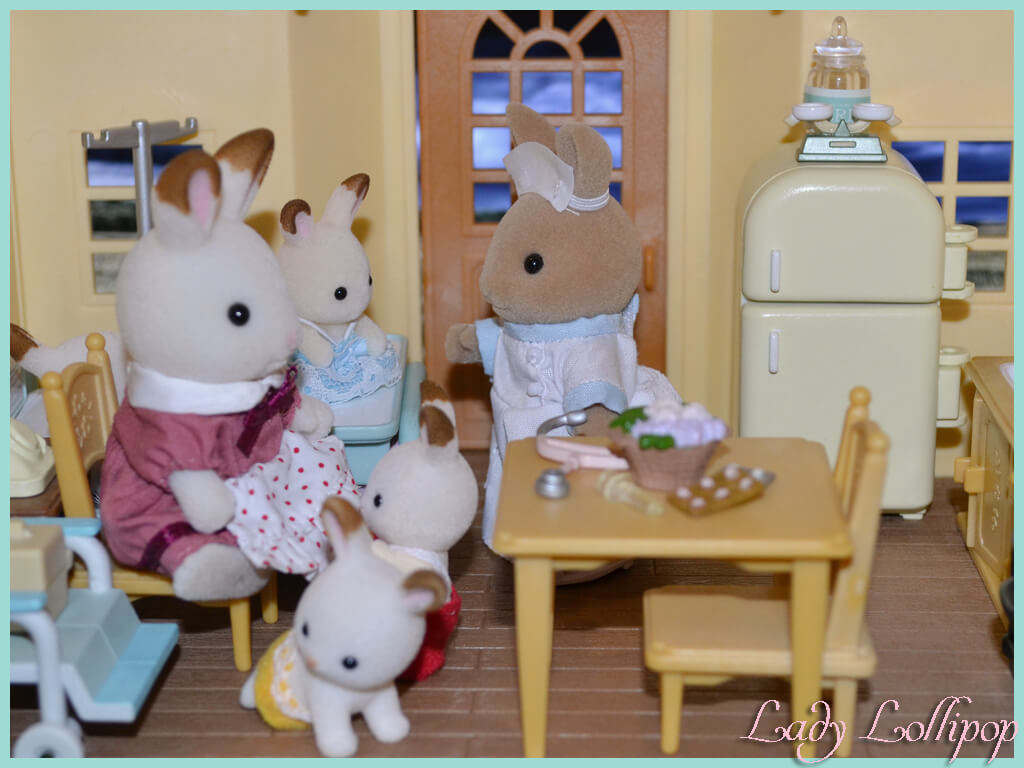 It was a rainy summer’s morning, but the mood was bright and cheery at the Rooibosch clinic. Things soon went back to normal after Christopher Cottontail’s emergency tail-operation and Nurse Emily and Nurse Marjorie went about their chores at the clinic like usual. But, today was different…

For today, was the day that Nurse Emily’s husband, Thomas Nightingale, was to arrive at Rooibosch Hill.  When Emily first arrived in the town of Rooibosch Hill, she found that they were in dire need of a medical professional. Having just graduated from nursing school, she grabbed the opportunity with both arms and made her home in Rooibosch Hill. Emily transformed the bottom floor of her little cottage into a day-clinic, but soon found that she needed help running it. Still, she had even bigger dreams of one day being part of the nursing staff at a brand new hospital to be built in the village in time.

Thomas, her husband wasn’t finished with medical school at that time and Emily found it extremely difficult being away from him for such long periods of time while he was still studying in Grinpa. Because Thomas was only able to visit over weekends and holidays, he could not work at the clinic full-time, so Emily called on her sister, Marjorie, to help out. Nurse Marjorie was the head nurse at the Cottage Corners medical centre, but she missed her sister dearly and it didn’t take much convincing to have her transferred to Rooibosch Hill to help out in starting the clinic there.

Dr Ben Beaver, one of the dentists at Nurse Marjorie’s hospital in Calico Corners also came to hear about her adventure and decided to make the big move with her. Both Ben and Becky, his young daughter, had gotten very fond of Marjorie and they couldn’t bear the thought of not having her around. Of course, the fact that Rooibosch Hill didn’t have a dentist at that stage was considered to be a sign that they were needed there and there was no further doubt about making the move. 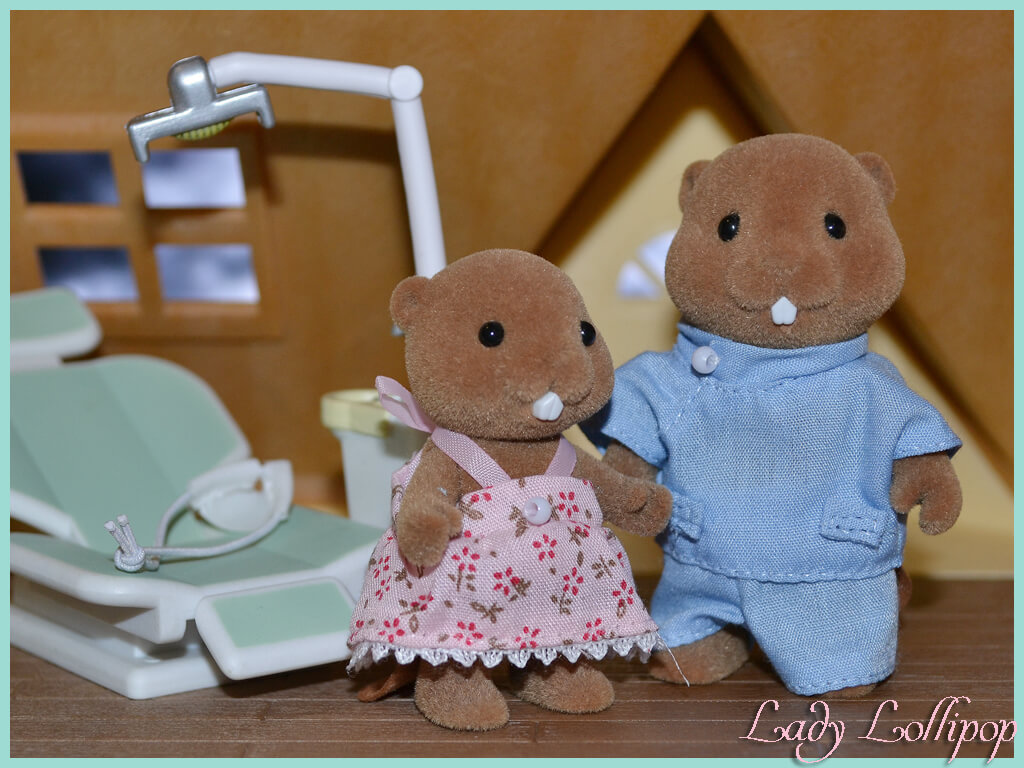 Together with Dr Ben and young Becky, the two nurses worked very hard to get the clinic up and running. Although it took some time and a lot of effort, they finally managed to build the Rooibosch Hill day-clinic into the fine establishment that it was now known to be. 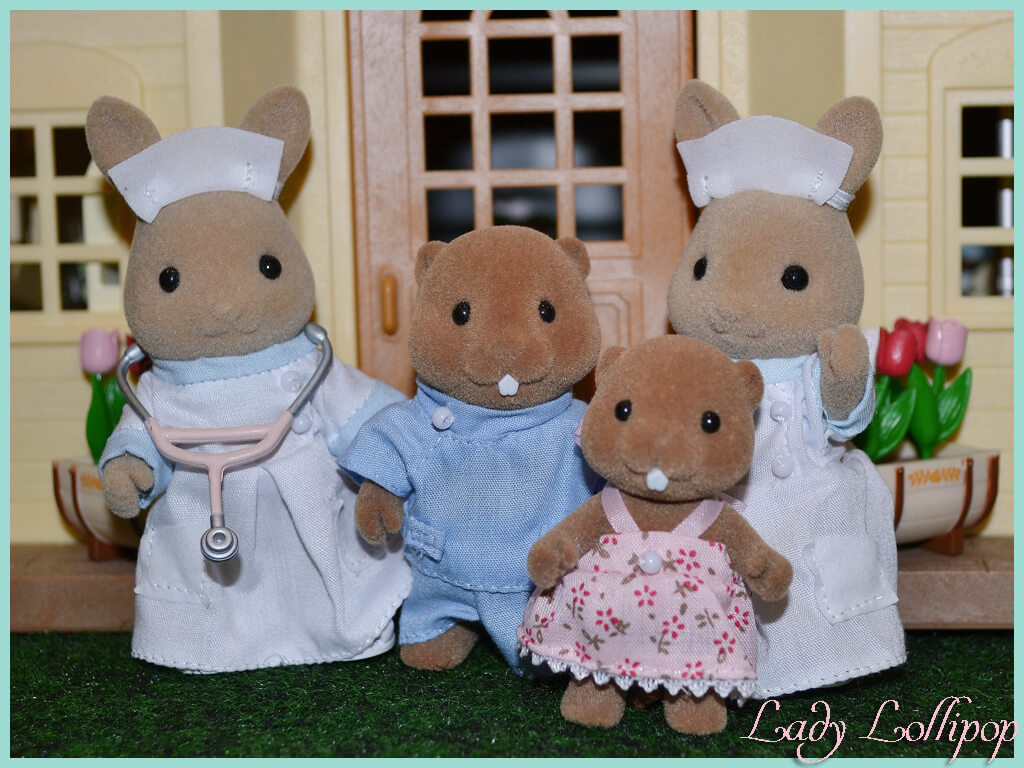 The mothers of Rooibosch were very glad to have such wonderful nurses at their new clinic and all of the children loved the lollies that they received for being such good little girls and boys and not crying when receiving their vaccines. 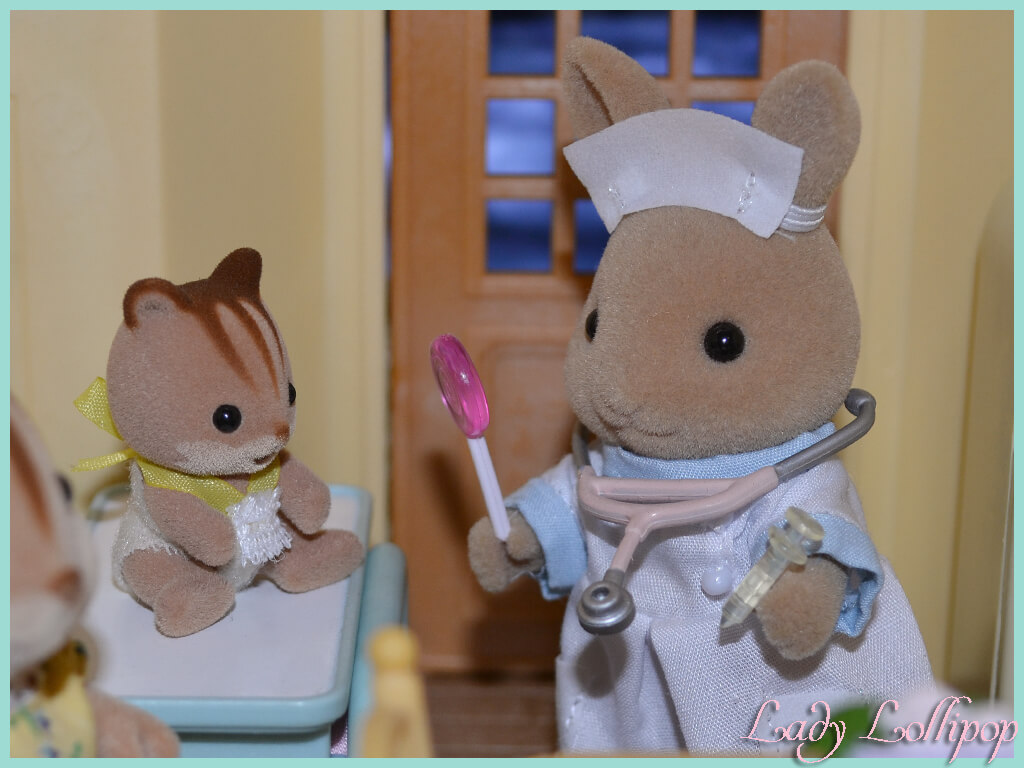 Of course the elderly of Rooibosch Hill were very relieved to have the two nurses so close at hand to soothe away their aches and pains. Things in Rooibosch were going very well, but Emily wasn’t quite happy yet. 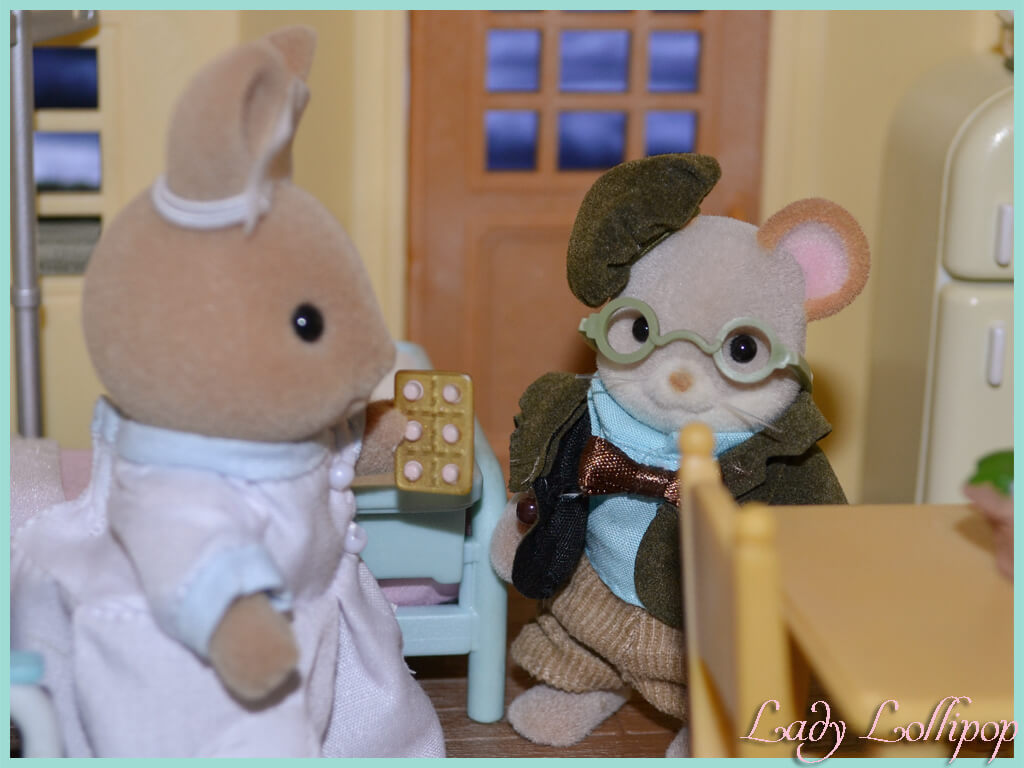 Even though she had her sister close at hand and she loved her job very much, she still missed her husband, Thomas. They wrote letters back and forth for months with only the odd visit when Thomas' exams allowed. But finally one day she received word that Thomas had passed all of his examinations and that he was allowed to start on the practical part of his course. The even better news was that Thomas was allowed to do his practical examinations at Rooibosch Hill! Emily was very excited and for weeks, she could talk about nothing other than Thomas! 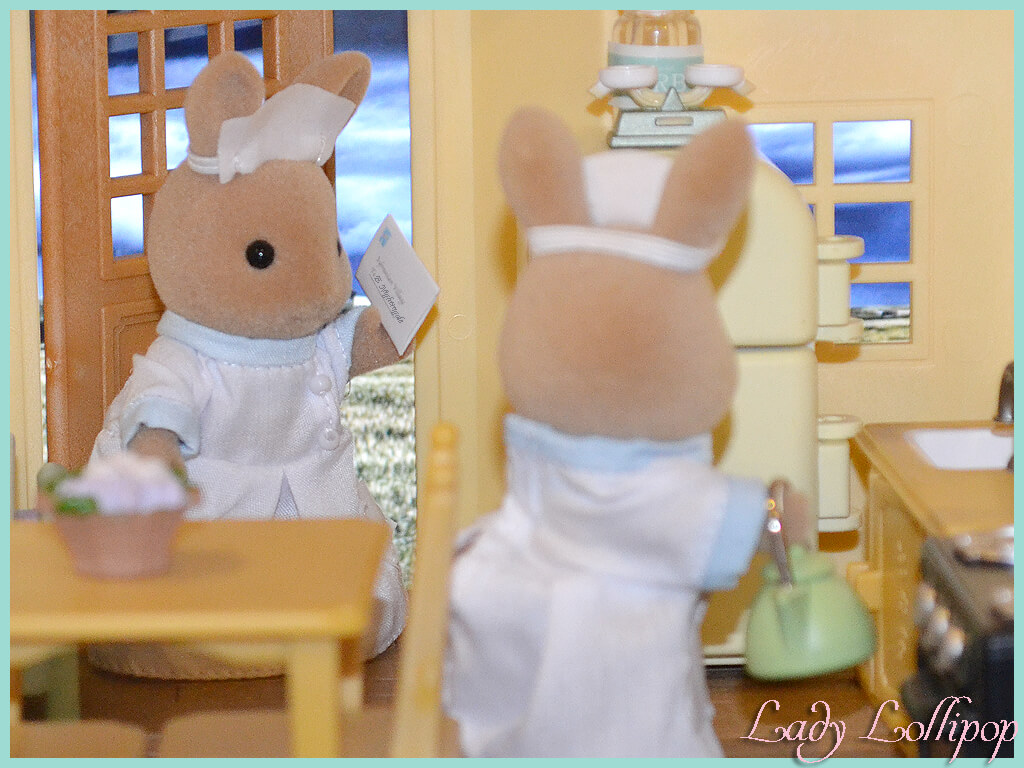 Finally the day that Thomas would come home to Rooibosch Hill had arrived. Emily struggled to contain her excitement! She had already been up since early in the morning to prepare one of her famous cakes to welcome him and was hopping about the little clinic as she waited impatiently. Marjorie shared her excitement and went about cleaning and dusting their little day-clinic for the new arrival.

By lunch time, the whole clinic sparkled from every angle and the smell of freshly baked cherry-cream cake drifted out through the open windows. By late afternoon, an eerie silence descended over the little cottage clinic. Emily was checking her watch every few minutes and even Marjorie was getting a bit nervous - for Thomas was late… 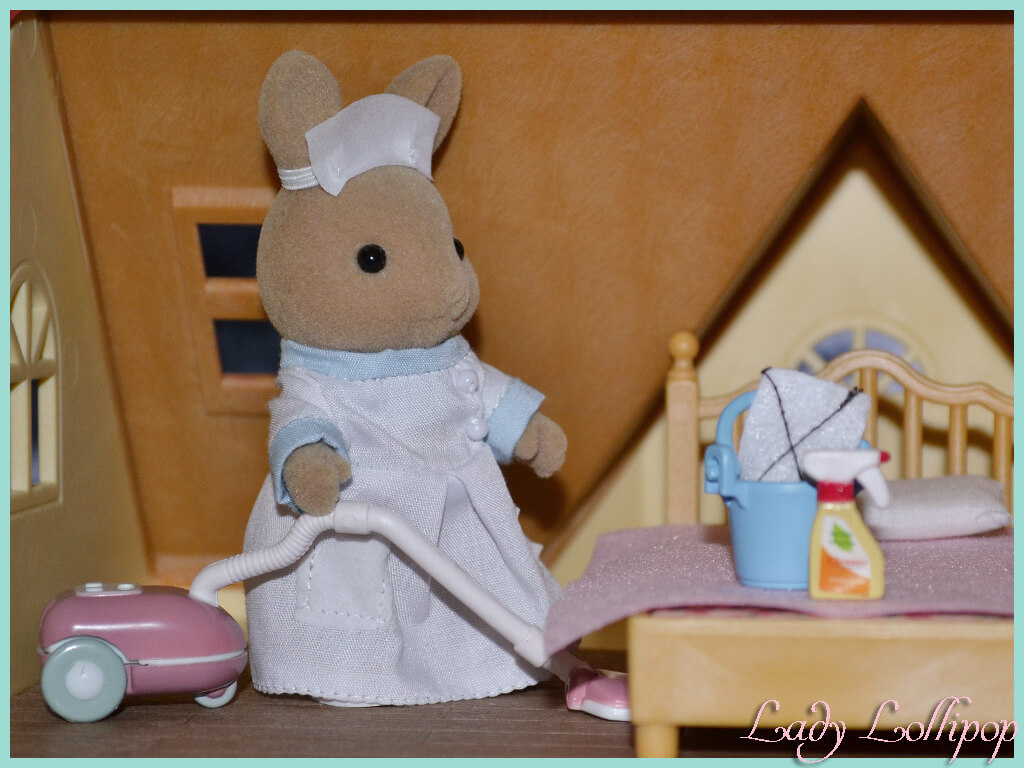 A cheery voice drifted through the silent Rooibosch clinic, when Mrs Bramble brought her two newly adopted babies, Honey and Hazel Pickleweed-Bramble, for their vaccines. The two were very noisy and very messy and it took both nurses to make sure that the little ones didn’t get into too much mischief. 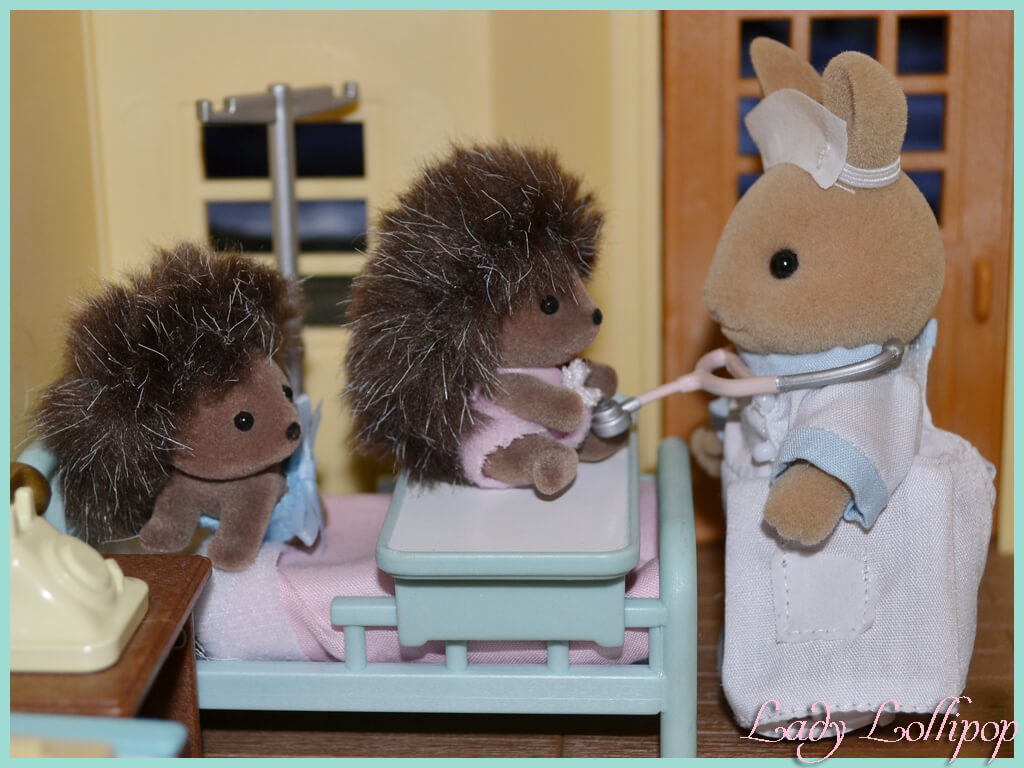 “There you go Honey, a lovely lollipop for being such a good little boy!”
Nurse Emily chimed as she handed each of the little baby hedgehogs a lollipop from her jar of homemade sweets. 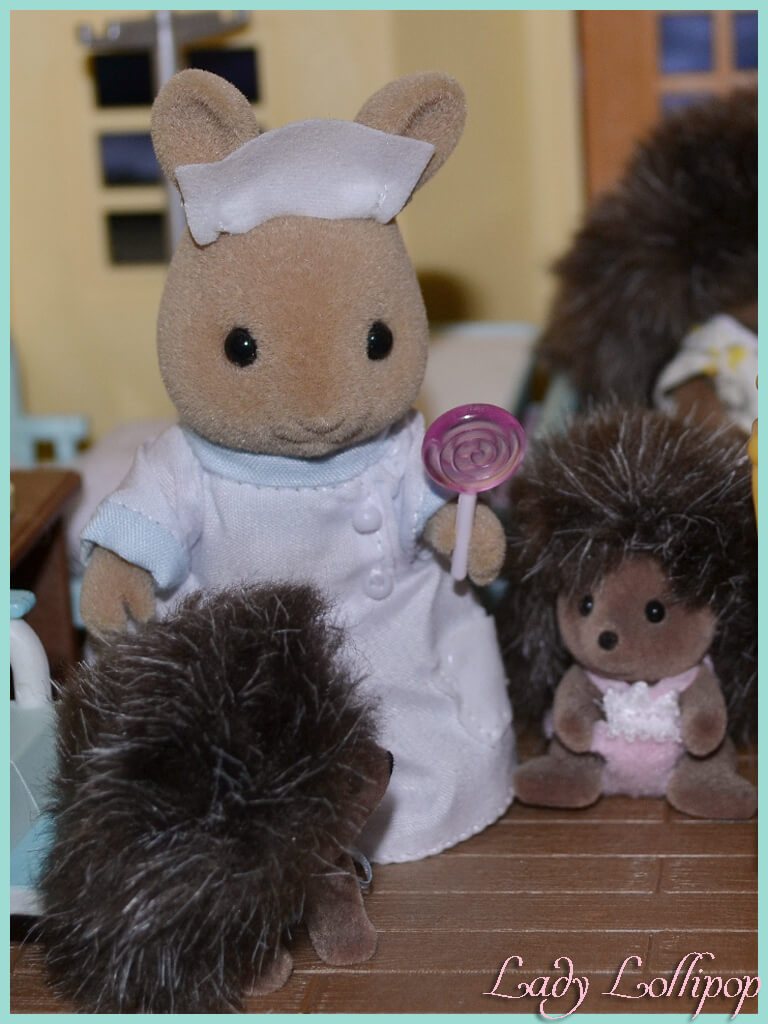 “Honey and Hazel are doing surprisingly well, I see. Their weights are both right on target and they seem to be in perfect health. How are you managing, Eleanor?”
Nurse Marjorie asked with her bright smile.

“Oh, you know how babies can be! Little monsters sometimes, but for the most part, they keep me going. The kids help me out so much with the new babies and Bilberry and Peaches love having their cousins around to play with. I do miss my sister awefully much though and I think that the little ones miss their mother as well. It is never easy losing a loved one, especially if you don't know what happened to them. It is always that bit of uncertainty, you know?”
Eleanor Bramble added with a sad smile as she grabbed a giggling Hazel just before she could fall off of the edge of the bed she was sitting on.

“Yes, it never is. But you must not lose hope. They may still find your sister and her family and you may all soon be reunited. If you need any help, just give us a shout. We will be more than willing to keep an eye on all of the kids if you want to have a little rest sometime, six kids can be very tiring!”
Nurse Marjorie replied. 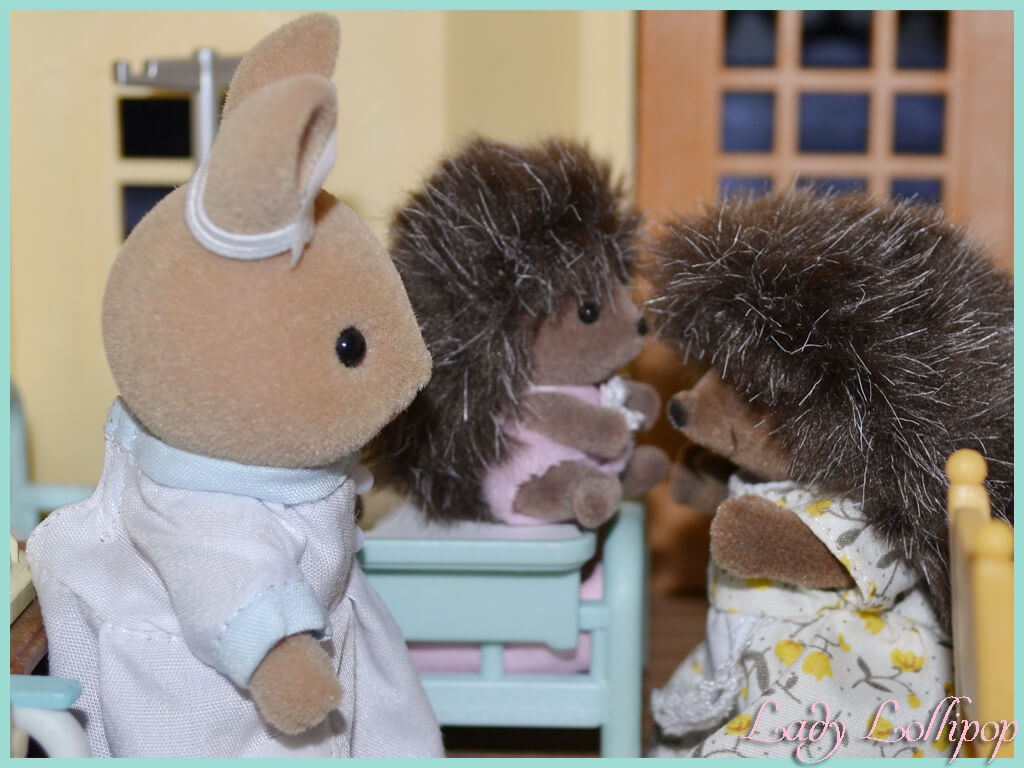 Just as the Brambles left, the Cottontail grandparents came into the clinic for a check-up. Grandfather Cottontail’s tail was healing well and he was back to his old self. 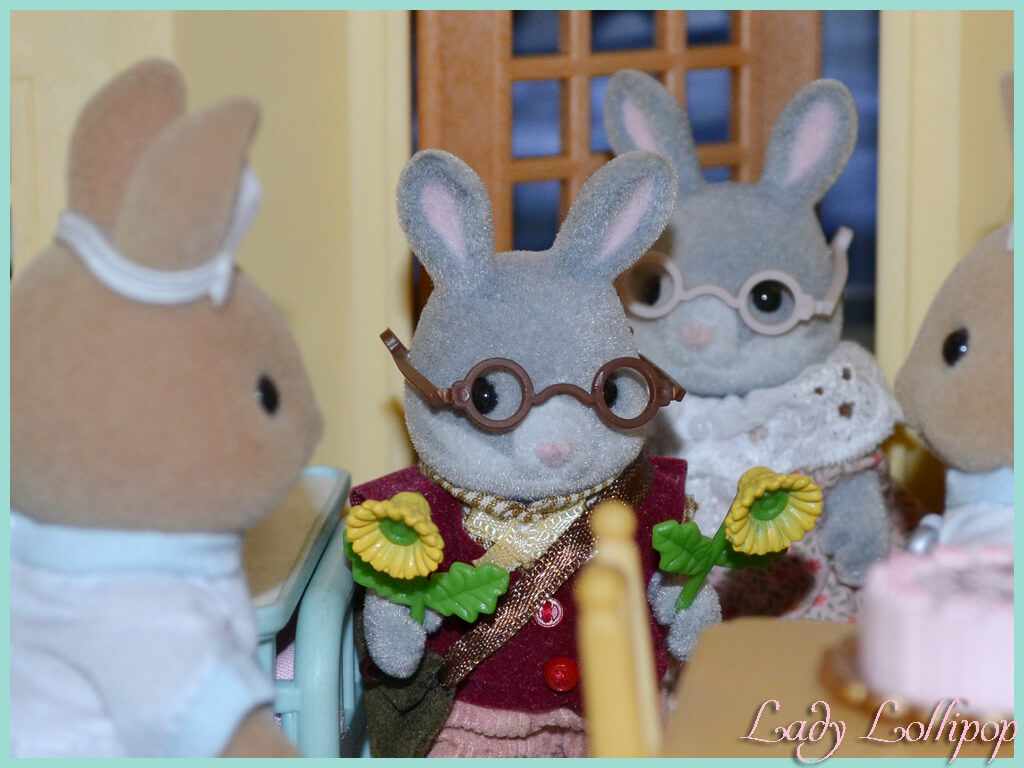 “Good evening my lovely ladies! We come bearing home-grown gifts.”
Christopher Cottontail greeted the two nurses, holding a flower out to each of them.

“Good evening Mr and Mrs Cottontail. Out for a late-afternoon stroll are we? How’s that tail of yours doing?”
Nurse Marjorie asked.

“Oh, just fine lovey. The pain is all gone and I am sleeping like a baby again. Dear Carmen has been taking such good care of me - even has me exercising and eating healthy at my age!”
Christopher reported, looking pleased with himself.

“I am very glad to hear such great news from my patients.”
Nurse Marjorie chimed as she reached for her stethoscope to listen to grandfather Cottontail's heart.

“Where is our new intern doctor? Surely he should have been here by now? I even brought him a welcome gift.”
Carmen Cottontail enquired, looking particularly disappointed when she didn’t see Thomas. 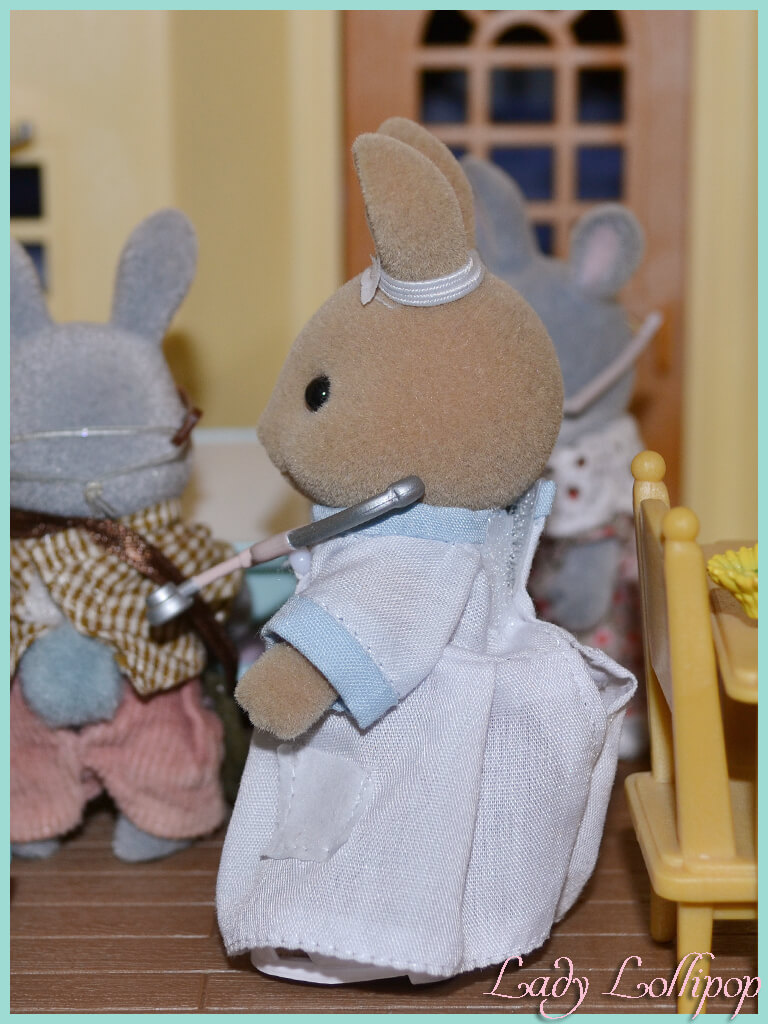 “Well, you see… Thomas is a bit late. Well, very late to be exact. We were expecting him over lunch and just look at the time already. Emily is pretty heartbroken, having been apart for so long, she is really looking forward to seeing Thomas again.”
Nurse Marjorie said in a hushed tone, hoping that Emily did not hear her.

The Cottontail grandparents took their leave of the two nurses just as the sun had begun to set. Marjorie tried her best to keep her tone cheerful and positive, but it was getting harder not to worry about Thomas being so late with each passing hour. Nurse Emily was particularly quiet all through dinner and after helping with the dishes, she excused herself to bed. 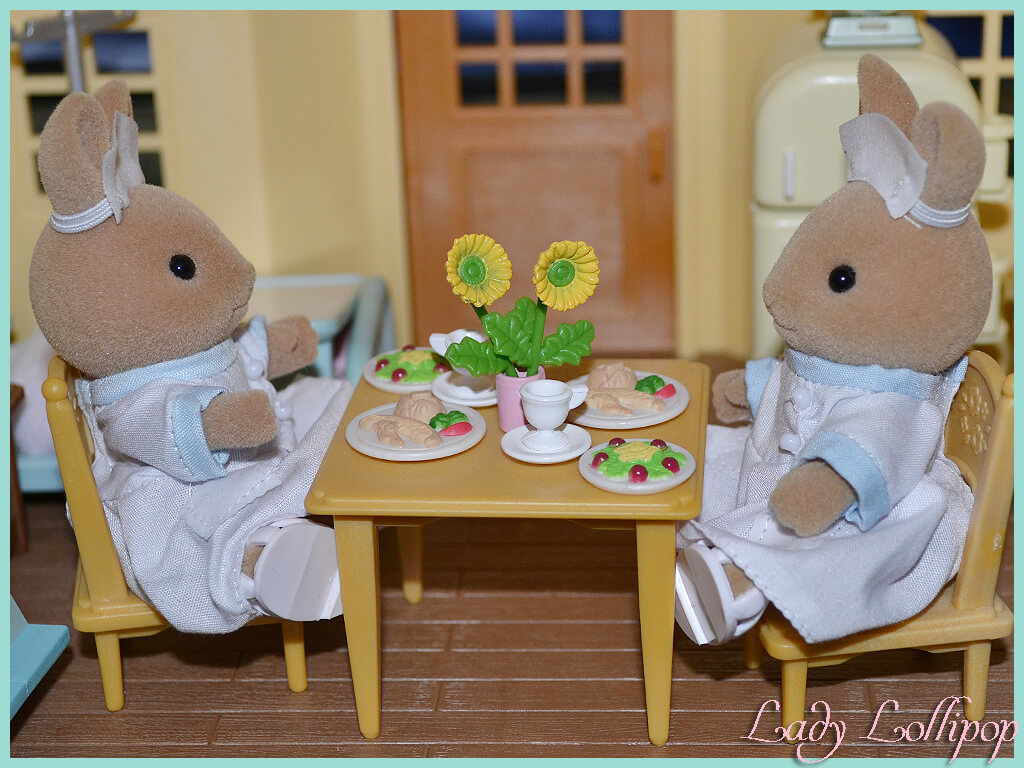 Emily cried herself to sleep that night, mostly because of the disappointment of not having Thomas arrive as planned, but also out of worry for her dear husband’s safety…

Marjorie had tried to comfort her sister as best she could, but she was also getting quite worried by now. When she was certain that Emily was asleep, Marjorie decided to do a bit of reading before bed to calm her nerves.

It was just after three in the morning when a shadowy figure neared the cottage. Marjorie had fallen asleep behind her story book, but suddenly she awoke with a start. Had she heard something rustling? Was that a voice? Surely she could not have, there were no patients sleeping over in the clinic, and there rarely were. But, Marjorie was certain she had heard a sound. 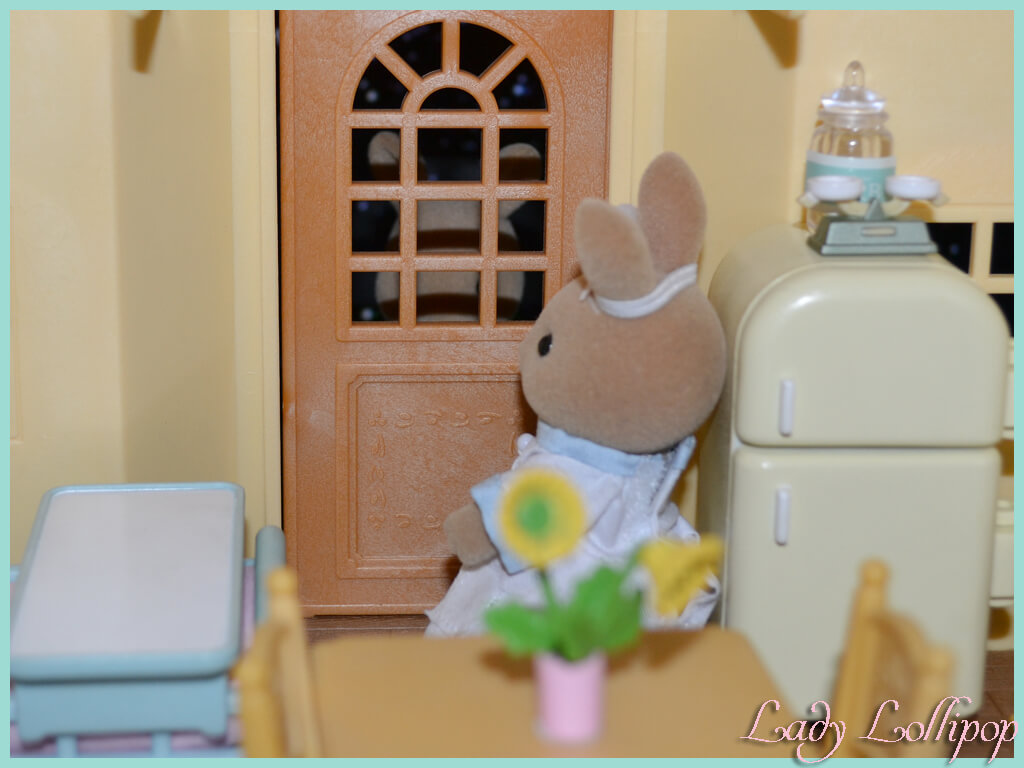 Cautiously she made her way to the front door, just as she heard the sound again. Yes, indeed! It was faint knocking accompanied by someone softly calling her name! She threw the door open, and there in front of her, stood Thomas Nightingale! He was looking quite worn out and by his facial expression she could tell that some sort of mishap must have befallen him on his journey. 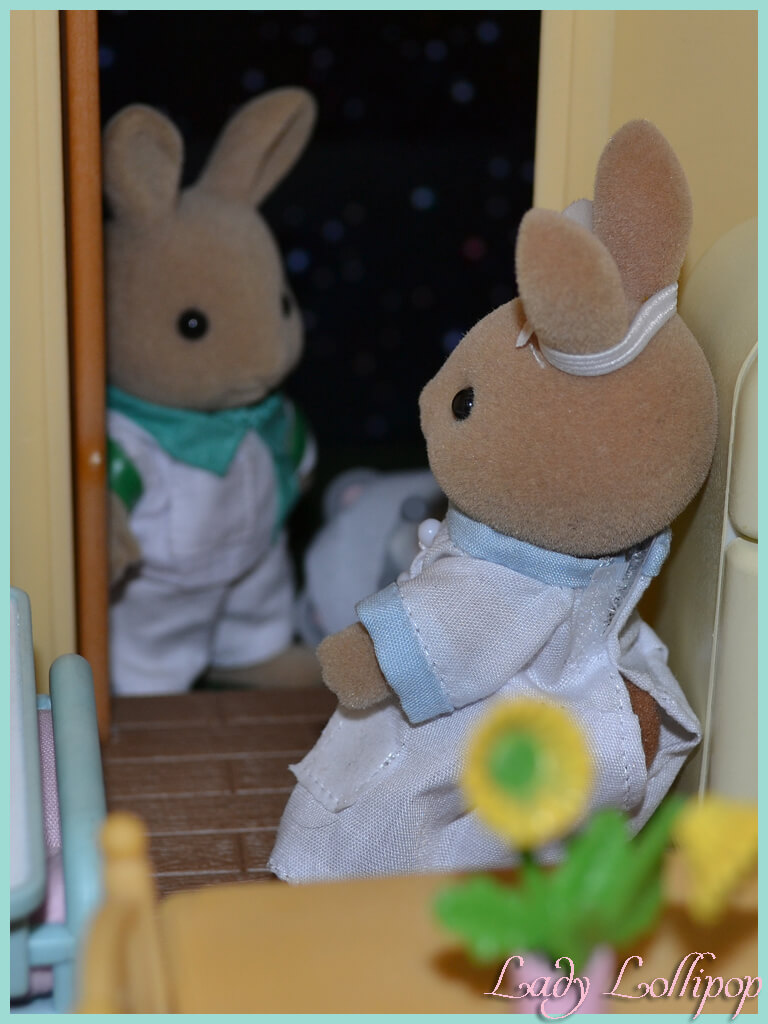 But, Thomas wasn’t alone as planned. He had a young boy with him. Marjorie couldn’t tell much of the child in the near darkness, but she could make out that he was a bear and from the bandages so clearly visible, seemed to have a head injury.

“Good heavens, Thomas! What on earth has happened to you!?”
Marjorie said with a shocked expression on her face. For a moment she did not know if she was dreaming, or if her brother-in-law was truly standing in the doorway.

“Good morning Marjorie, I am so glad to see you! Help me get this little guy in bed, please. I am exhausted from my travels and don't think I can manage another step!”
Thomas replied with a slight smile, looking very tired indeed. 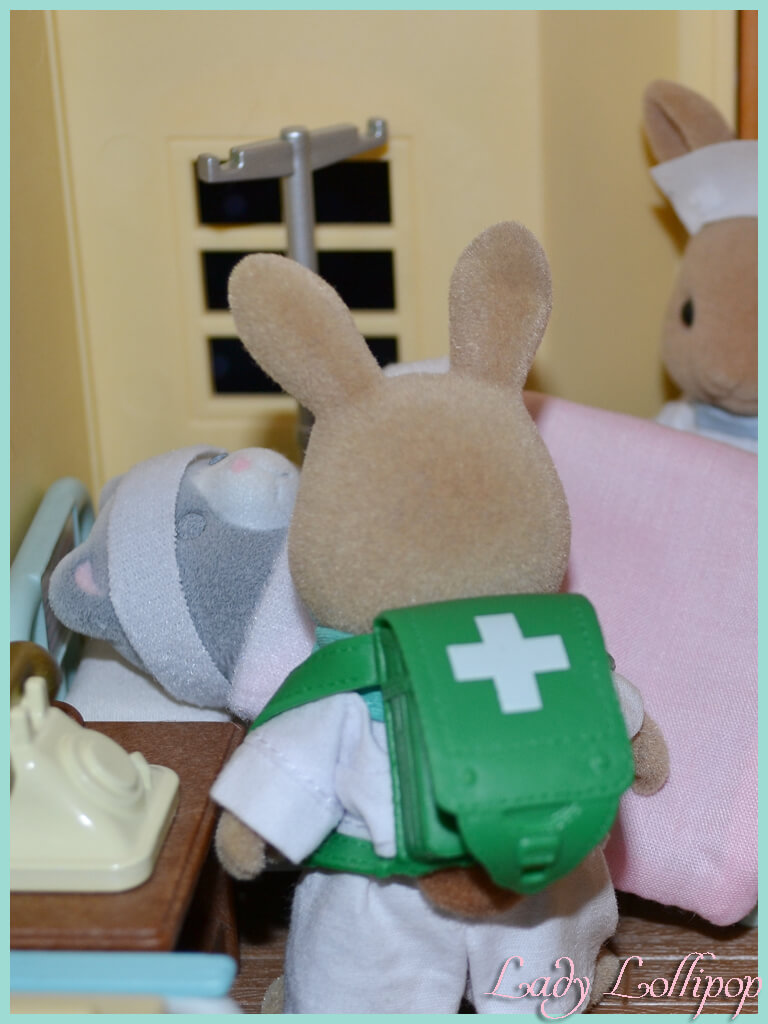 Marjorie helped Thomas to get the boy into a bed and listened intently as he laid out the story of how he found the young bear on the side of the road he was travelling on towards Rooibosch Hill. Thomas had spent most of the day trying to find the boy’s parents, but had had no luck. He told Marjorie that the boy had a head injury and that he decided to bring him along to Rooibosch Hill to get proper medical attention and to try to locate his parents.

Marjorie told Thomas about how sad Emily had been when he didn’t arrive as planned and offered to take care of the boy so that Thomas could get some rest. 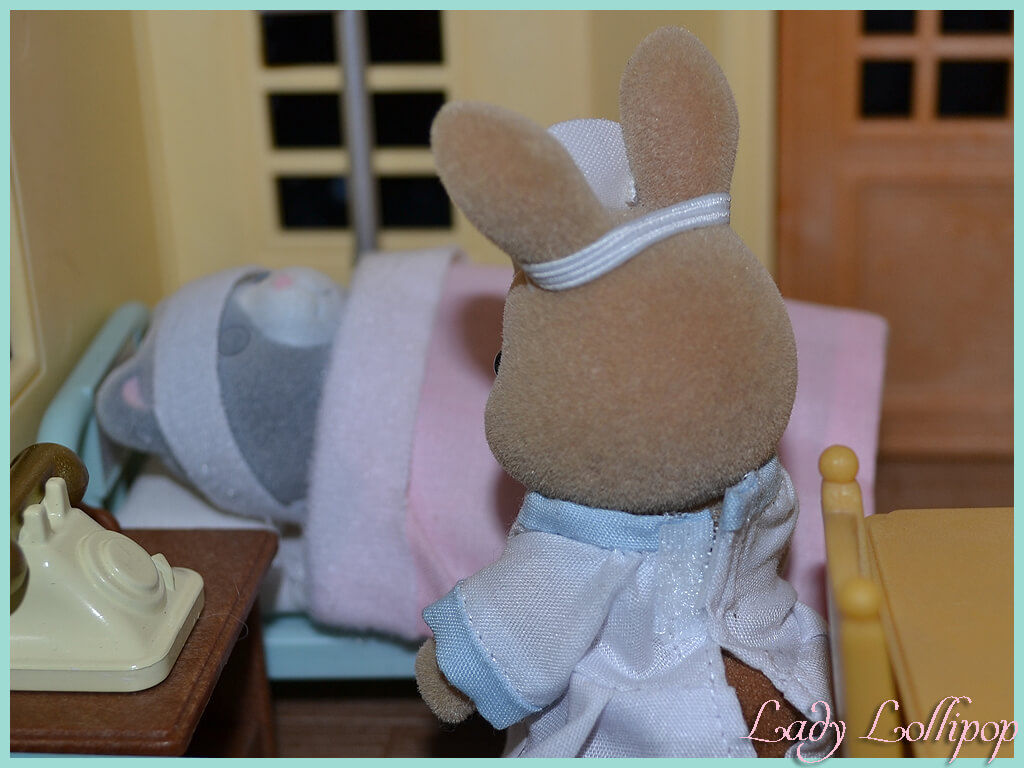 Thomas gladly accepted and silently crept away to get cleaned up a bit after his long journey.

After Thomas had a quick shower to wash the dirt from his travels off, he silently crept into Emily’s room. He stood watching her, still fast asleep, with the first rays of morning sunshine falling across her face and he felt very happy to be home.

Slowly and silently, Thomas crept into bed next to Emily so that she didn’t wake up and as soon as his head hit the pillow, he was fast asleep. A big smile on his face from the thought of Emily’s reaction when she woke up later…